The Manchester Opera House and First Family Entertainment have pulled out all the stops this year and delivered what is possibly their most spectacular Pantomime ever. This show really has everything from lavish sets, catchy songs, comedy a plenty and a superb cast led by Pantomime debutants Torvill and Dean.

From the second you enter the theatre with the box office decorated for the festive season there is no mistake you are entering pantoland. The buzz in the foyer created by the excited children both young and old was electric illuminated by the now standard flashing toys which seem to surface around this time every year. 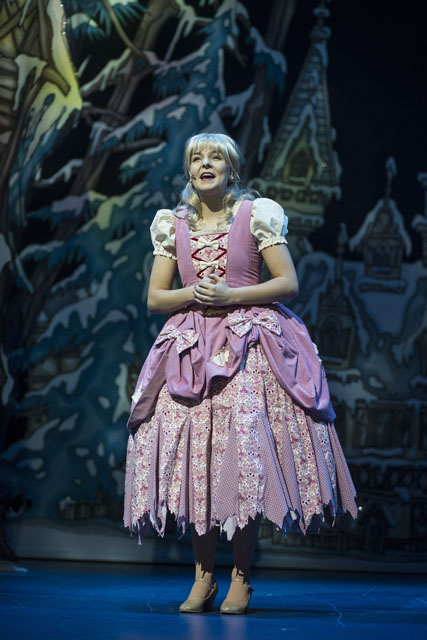 The traditional story of Cinderella is here, Cinderella is bullied by her ugly sisters whilst Buttons carries a torch for her that is extinguished when she sees Prince Charming for the first time at the ice festival. Upon finding her shoe which she loses as the clock strikes midnight our Prince seeks out his Princess by visiting every lady in the land to find the shoes owner. The only modification to this story is the introduction of fairy godparents played by Torvill and Dean.

Cinderella is played by Eloise Davies who bears an uncanny resemblance to a young Toyah Willcox and manages to convey the innocence of the role well. With a strong voice which may have possibly wobbled at a couple of points she is someone to watch out for in the future.

Cinderella’s arch enemies in this production, the ugly sisters go by the names of Rita and Cheryl and are played by Dave Lynn and Tim Hudson respectively. Both veterans in the dame game they have the regulation over the top costumes and bad jokes a plenty. I did get the feeling however they didn’t make full use of the witty script provided by another veteran of the panto dame society, Eric Potts.

The laughs as ever are provided by love sick Buttons (Andre Vincent) who helps keep the whole show ticking over nicely. It is clear the amount of rehearsal he has put into the show especially during the invitation and chocolate scenes. Vincent’s interaction with Cinderella was fun to watch as well as that with the Baron (Anthony Houghton) whom also was assistant director here in Manchester.

For me though the two standout performances of the evening were from Prince Charming (Liam Doyle) and Dandini (Samuel Holmes). Doyle looked every inch the prince as he pursued Cinderella after their first accidental meeting. He also was gifted some of the best songs of the night displaying his fantastic vocals which has seen him to perform in West End hits Wicked and Ghost to name just two.

But head and shoulders above the rest was Holmes as Dandini. His camp style suited the role perfectly and had the audience in stitches from the first moment he took to the stage. His big number at the start of act 2 was a show stopper performing on what looked like a glitter laden Phantom of the Opera masquerade staircase.

As mentioned earlier Torvill and Dean are making their Pantomime debuts here in Manchester, although you wouldn’t know it. Taking to this theatrical genre without any signs of nerves or apprehension they captivate the audience performing several routines on in-line skates. And what would a Torvill and Dean performance be without their world famous Bolero? Yes, it is here in all its glory complete with the famous purple costumes, however this time the routine is taken quite literally to new heights and is totally breath taking. Looking round the auditorium it was a joy to see children with mouths wide open in awe of what they were seeing. Proof that this amazing routine appeals to people of all ages and is quite literally timeless.

An able ensemble of 8 provide various background roles throughout the show assisted by a troupe of 10 youngsters, tonight we had the red group on stage. I must make particular note to the young lady that announced the guest’s arrivals during the Princes Ball, a star in the making.

Despite searching through the programme I could not find the name of the person responsible for the glorious set the Pantomime boasts. I am sure there is no spare glitter left in the Manchester area as it shone throughout. The transformation sequence was clever and just different enough from the norm to make you sit up and wonder what you had just seen. And yes of course there are ponies drawing the crystal carriage.

A 6 piece band under the direction of Steve Power provide live music throughout and even have a line in the first half!

Pip Minnithorpe has directed what is without question the best Pantomime Manchester has seen in a long time. Sumptuous from start to finish, you really don’t want to miss this!

Cinderella plays at the Manchester Opera House until the 3rd January 2016 and details of tickets and performance times can be found at http://www.atgtickets.com/shows/cinderella-2/opera-house-manchester/