Kicking off with the red-waistcoated Wigan Youth Brass Band, under the direction of Toby Hobson, and ‘Aces High’, we then heard the first of a few arrangements by Alan Fernie in ‘Arran Melody’ to commemorate the band’s tour to the Scottish district earlier in the year. ‘O Mein Papa’ was next before another Fernie, the rather majestic ‘Prismatic Light’. A special long-service award was presented to one of their members who will be leaving the band to study music further. 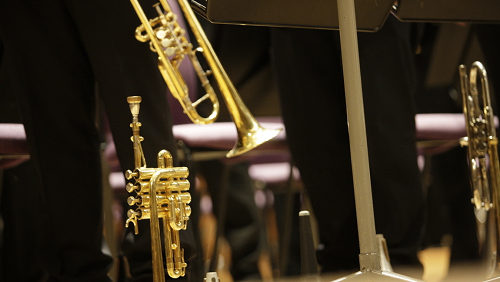 Wigan Youth Brass Band were next, from within the audience, donning their black waistcoats, to present various movements from Peter Graham including a dramatic piece entitled ‘Flight’ from Northern Landscapes. Trombonist and BBC Brass Musician of the Year finalist Gemma Riley was then introduced by conductor David J Little for a solo of Don Lusher’s ‘Concert Variations’ - a piece that was performed with the man himself at the Millennium Dome back in 2000 and will be part of the band’s programme when they tour Italy in the summer. A ‘wartime’ medley then featured recognisable anthems like ‘The White Cliffs of Dover’ and ‘We’ll Meet Again’ in a set called ‘Keep Smiling Through’ in which Daniel Wilson also had a solo. The last piece before the interval was the renowned ‘Music’ by John Miles which was played beautifully, as were all pieces.

Commendation should go to the percussionists and drummers throughout the night as display such skill and in their discipline. After the break was the turn of Bolton Youth Brass Band, wearing blue waistcoats, who started off with Birdland from The Weather Report, under the baton of Matthew Ryan who incredibly only took the band over 6 weeks prior, admitting that this was the first chance for some players to perform live in concert. In a change to the programme they then played ‘Heart of Courage’ which can apparently be heard on adverts for Game of Thrones, then a brass equivalent to Lily Allen’s emulation of Keane song ‘’Somewhere Only we Know” before a medley of tracks from ‘The Phantom of the Opera’.

Finally came a group presentation of all three bands ad their tutors ending the night with William Rimmer’s ‘Slaidburn’, the patriotic ‘The Irish Blessing’ and ‘Pound The Streets’. It should not be forgotten that these young people are so dedicated to their art and their talents should not be underestimated. With a few silver instruments between the mass of brass, there is no stronger power than an ensemble of brass players expressing their indulgence of blowing their own trumpets, trombones, euphoniums, etc.

Keep up to date with further concerts of the bands on their websites or check the RNCM website and support them on their journey to further success.