This slick and rather elegant revival of Frederick Knott's sinister television play and post-war theatre hit is pushing all the right buttons to ‘Dial M for Murder’ as it kicks off its UK tour at Richmond Theatre. Set in a post war Maida Vale apartment, the play was famously filmed by Hitchcock but this new production, directed seamless by Anthony Banks is set slightly later, in the summer of 1963 which has a cinematic and retro quality about it that is somewhat more voyeuristic than previous productions and certainly brings the dated script a little more up to date.

The design team on this production (Set Designer, David Woodhead, Lighting Designer, Lizzie Powell and Sound Designers, Ben and Max Ringham) have excelled in creating a beautifully crafted, stylish but simple 60’s backdrop. From day to night lighting effects, rain on the apartment windows and sounds of aeroplanes flying overhead, the team have omitted no detail to allow the audience to become thoroughly immersed in the narrative as if watching the action on the big screen. 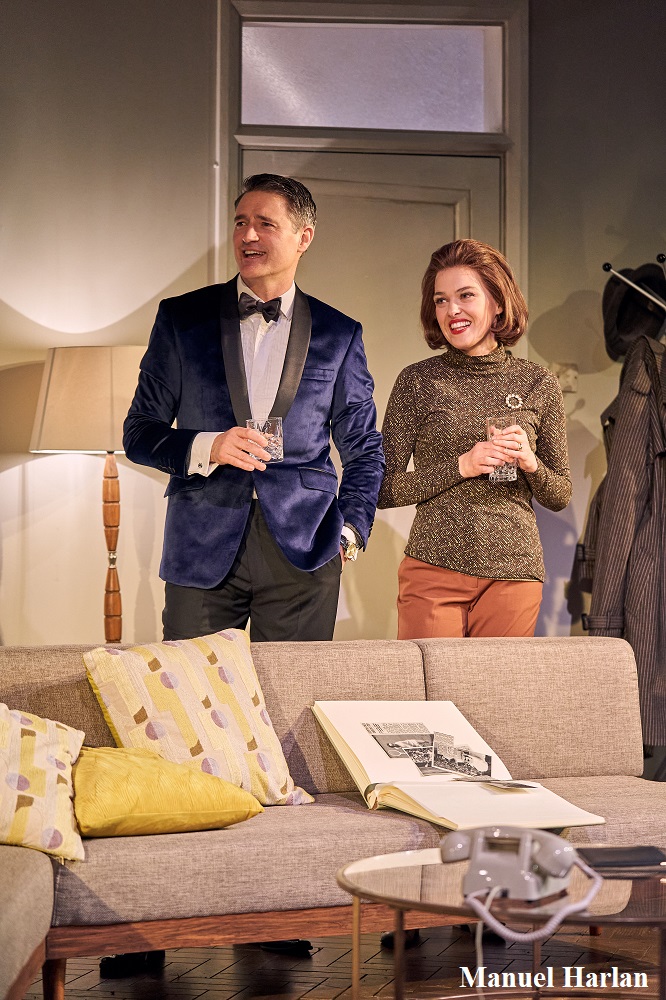 Dial M for Murder is a psychological thriller of double-crossing, blackmail, lies, plot twists and of course murder and Banks new production does not disappoint, gripping the audience from the very outset. A fading tennis star, Tony (Tom Chambers) has discovered that his wealthy but unloved wife Sheila (Sally Bretton) has been enjoying an on-off affair with the younger television writer Max (Michael Salami). Tony has spent years coming up with the perfect plan to have his cheating wife murdered by a third party, a fool-proof plan that provides him with the perfect alibi. But on the night the plan backfires and Sheila flips from victim to perpetrator paving the way for a classic “who-done-it” style investigation and a famously suspenseful closing scene that leaves the audience gripping their seats as the identity of the true villain is revealed.

The cast are fantastic, Chambers takes complete command of the stage physically; he is a delight to watch in this lead role and oozes style and charm throughout delivering perfectly on the role of Tony. He is impressively unruffled and completely convincing as a manipulative and scorned husband. In contrast, an immaculate Bretton showed us Sheila’s intense vulnerability and emotion across her performance: an outstanding characterisation and totally believable wife torn between love and duty.

The script itself is a little slow in the first half and takes a while to build the tension, but the second act certainly delivers, especially when the persistent Inspector Hubbard (Christopher Harper) arrives and the investigative tensions builds.

Overall ‘Dial M for Murder’ is a compelling watch, with some clever plot twists, combined with a talented cast and incredibly skilled creative team. This production provides a master class in the production of thrilling, high-value cinematic theatre and is highly recommended as it continues on its UK Tour until July 2020. Tickets are available at: https://www.atgtickets.com/shows/dial-m-for-murder