Talk to Yourself - The Kings Arms

This is an artistic trilogy: a monologue, a painting and music. (Although the publicity info states it will be a cello, it is in fact a keyboard and gadgetry providing electronic soundscapes and “found sound”.)

There are three female performers and it is very much a female piece, based around the real life accounts of women's experiences with pregnancy and abortion. Not surprisingly, it isn’t big on laughs, but is rather understandably heavy. It is supposedly set in a dystopian reality where women's choices are limited, but to be honest, I only know that because I read it; I didn’t think that came across sufficiently. 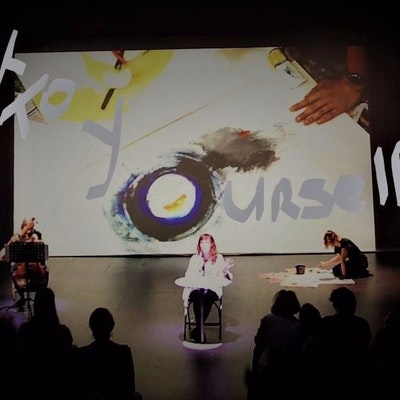 The spoken words were very realistic – possibly because of their basis in fact. The protagonist was very grounded and naturalistic, giving a broad, gutsy performance. She was very credible and came across as a real person, not a functional caricature.

Atmospheric sounds effectively underline the salient points of the monologue, which are very powerful, both in the writing and the acting: the protagonist getting pregnant at 18, telling her mum, waiting for the pregnancy test, taking the morning after pill and her body actually aborting the finger nail-sized foetus.

I thought the strength of the script was in the various very well-crafted, tense and thought-provoking scenarios, rather than the piece as a whole – again – possibly due to it being compiled from several authentic, verbatim accounts.

Meanwhile, to further illustrate the spoken narrative – no pun intended – an artist painted a series of abstract images, which were projected onto a large screen in the background. On the one hand, this was interesting and unusual, although you could argue that it distracted from the monologue. There was apparently meaning behind the artwork, but it eluded me.

The music was evocative and very successful. The acting was first rate. The general direction was very good with a lot of devices used to create movement in what could have been a rather static talking head piece. There is certainly talent on show here. It’s artistic, avant-garde even, memorable and different, but – for me – only partly successful.