Described as “a white-knuckle ride into the dark heart of humanity, and a search for the true meaning of Orlando Bloom*. Expect to be moved. Expect to be thrilled. Expect bears. So many bears. *Show may contain traces of Orlando Bloom.” In fact, the only thing Orlandean was a life-size cut out, standing at the mic, centre stage.

The show is the brain child of Leo Mates, actor, performer, writer, comedian. Leo enters wearing glasses and a beret. He sticks a photograph of his own face over Orlando’s and introduces himself as Hector Dunderbridge, the world famous playwright, author of such classics as ‘The Bears and the Bees’ and ‘Punctuation: the Musical’. He is pompous and aggressive and remains in character all the time.

Hector begins with the performance of one of his pieces, using (sometimes reluctant) audience members. He is rude, impatient and overbearing. “Don't ad lib!” “Go back to your seat!” He pulls out the poor, unfortunate, unsuspecting audience members seemingly at random, regardless of gender, so the character of “Mother” is a tall man with a beard, whilst “Man” is a young woman in a flowery dress, which just adds to the absurdity. 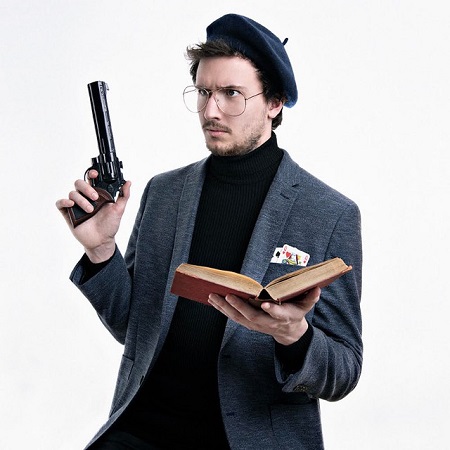 The play is terrible, Hector is terrible. A seat at the front is marked RESER-VED. for a famous producer to come and see the show, but we all know he will never arrive.

Next – and again with audience participation – Hector performs his renowned play ‘The Bears and the Bees’. “A love story set in the time of bears.... And bees.” As I was reviewing and scribbling frantically in a notebook, I was the only, sole, solitary, person who wasn’t pulled up onto the stage. (God bless North West End!) The audience seemed to take it all in very good spirits and there was much laughter. Though possibly nervous laughter.

Whilst Hector Dunderbridge is a self-important bully, beneath the glasses and the beret, Leo Mates is very likeable. He has great stage presence and a very powerful, booming, theatrical voice. He holds a mic, but really doesn't need it. He is confident, his performance is assured and he is charismatic. He is also a credible actor and seamlessly conveys mania, arrogance, self-doubt, mania, bitterness, resentment and mania. In fact, Leo projects mania and hysterical madness with worrying ease!

As the show progresses, Hector becomes increasingly manic, waiting for the producer who isn't going to show, then he gets a text from Orlando Bloom, who is apparently locked outside and Hector has hijacked what was supposed to be his show. Hector holds the audience to ransom; the doors are locked. His mania increases. With Hector/Leo ranting, sobbing, shouting, threatening, I actually began to feel like a genuine hostage. “Keep the doors locked!” But then I must have got Stockholm Syndrome, because I started to really pity poor Hector, who had a moment of self-realisation.

How were the audience freed, you might ask? If indeed they were? You’ll have to go and see the show for yourself. It was a very effective end to a bizarre, leftfield, off the wall, under the radar and surreal experience. It is almost unquantifiable. It is certainly memorable. I thought Leo was a very strong performer and – for me – stronger than the material. He finished, as himself, by saying: “If you've enjoyed the show tell your friends. If you haven't... Tell your enemies.”

You can catch Orlando De-Bloomed at the King’s Arms on 19th and 20th July. But tell someone where you’re going, take backup and don't look Hector in the eye. https://manchesterfringe.eventotron.com/?event=37595