The piece is written and performed by first year drama students from the University of Salford.

Regulars gather in the local boozer, the Queen’s Legs, on a Friday night. Each person has their own reason for being there, their own secrets and their own skeletons. The landlord, Charlie, is jovial, a decent sort, the only male in the piece and the lynchpin holding the characters together. And sometimes apart.

Lucy is a permanently late barmaid with a very authentic waver in her voice; her childhood was haunted by an abusive father and she struggled to overcome drug addiction. Andi, short for Andrea, friend and sort-of bar staff, is leading a double life, she’s homeless, aggressive and lost.

Each character has a story of why they are who they are, based on their childhood, their upbringing, with alcoholic or drug-taking parents, abusive fathers, absent mothers, foster care, death. Each addresses the audience at various points to reveal their backstory, in heartfelt and often impassioned monologues. During these sections, the other actors freeze, which is visually arresting and very effective. 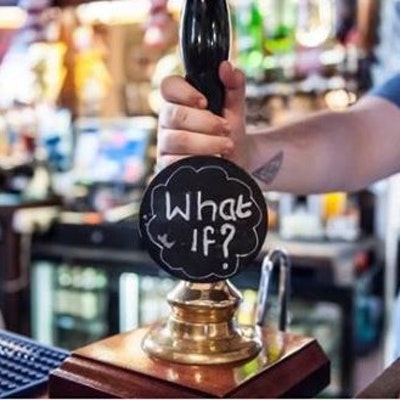 The entertainment arrives, Lexy on guitar. She bravely sings unaccompanied, but in a showbiz-oozing style, like a performing puppet, singing because she’s expected to sing. "We've all got issues." she wisely says, which underscores the point of the play.

Patrons drift in. Emma Lee (“Two words, no hyphen.”) is dressed to impress but impressing no one. She is shallow, drunk, cocaine-snorting, obsessed with her looks, her image and social networking. “What is a friend these days? Just...” (thumbs up) “a like."

Delilah is a vividly dressed vegan artist, pretentious and self-obsessed, unaware of the feelings of the people around her. Landlord Charlie asks her out; she laughs hysterically.

Towards the end of the play, a mature business woman appears in the bar and it all gets suddenly surreal with splinter scenes featuring a judge and jury. They were well-acted, impeccably timed, but I felt they were somewhat jarring and out of place within the context of the play.

I thought the acting throughout was of a consistently good standard and the characters were well drawn, but I didn’t always feel this play was the best vehicle to showcase their talent. That they are talented isn’t in question. It is presumably a play written by committee, with the cast pitching in ideas. At times it reminded me of the Stockport pub comedy Early Doors (and in the future Charlie may well turn into John Henshaw, a very credible comedy and character actor.) Sometimes it was very much a showcase and seemed to have every theatrical trick thrown in, simply because it’s theatre. There are some rather clumsy metaphors “I’m a moth, but I want to be a butterfly.” Or the rather obscure: “I’m prawn cocktail, born into a cheese and onion family.”

Though it treads a fine line between comedy and pathos, there are some very funny, laugh out loud moments, but ultimately the piece ends with the characters suddenly, very soberly, relating suicide statistics, which – while shocking and poignant and quite damning to society – felt somewhat tacked on, as though an after-thought to give the piece resonance.

So the play ended on a very grave note, but I’m going to end on a positive. Despite being students, the cast came across very confidently. Perhaps there were nerves backstage, but – like true professionals – none of these transferred to the stage. If this is the result of one year of drama tuition, then these young stars have a bright future.

They’re serving last orders at the Queen’s Legs on Sunday 14th July at 2pm, at the Kings Arms in Salford. https://manchesterfringe.eventotron.com/?event=36989