Maddy and Marina Bye are back in their new sketch show The Siblinging. Through a series of ridiculous characters, these IRL sisters show off their quick wit and chaotic nature. They have an amazing energy between the two of them it’s hard not to fall into their web of nonsense, and if you do, you’ll be rewarded with an hour of stupid fun.

This London-based duo show off their accent work early on with the two sisters looking for a theatre in New York and asking to help put their phones on airplane mode. Their synergy in this sketch is beyond impressive – talking over one another, finishing each other’s sentences and working the room in tandem. Rubber bands are used to imitate the overuse of cosmetic surgery by two mummy dah-lings who are excitedly discussing new techniques. 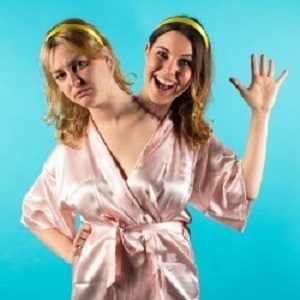 Maddy and Marina write what they know, so there is considerable time spent on upper class West-London types from private schools and pony clubs. Although this material may seem out of reach or unrealistic to those who weren’t born with a silver spoon, the jokes are accessible without a background in affluence.

There is no overarching storyline, but there doesn’t need to be for this to work. The impetuous feel of the show is a great strength and it maintains a fresh vivacity throughout. Their comedic timing is bang on, but the pace slows considerably in the second half of the piece. Longer sketches with fewer quick laughs drag slightly, but there are still considerable jokes that keep the audience tuned in. The show is nicely wrapped up with a quick revisit of each character as a ‘Where Are They Now’ segment.

This duo are a raucous good time with stupidity and idiocy at the fore of their work. The Siblinging is a crash course in character clown sketch comedy, and if you’re willing to let them take you on a journey to nowhere, it’ll be worth your time.

The Siblinging continues until the 26th August at various times. https://tickets.edfringe.com/whats-on/siblings-the-siblinginging