The Quays Theatre was sun-kissed this evening, reflected in the warmth of an audience, anticipating the off kilter, from this Devon based Canadian.

I had not seen Craig live before. I could not help but be carried along on this swerve-ball ride by his love of life, and, celebration of cultural difference, even if a lot of the jokes were on us Brits.

Imagine an Iron Maiden roadie, mashed with Bill Bryson’s inner chimp let loose, fused with the stoner sensibilities of Zach Galifianakis’ Hangover role, plus Man-Mowgli like energy and you have my loose portrait of a thoroughly engaging comic with a fascination for what we make of each other.

Craig looked like he had literally stepped off life’s hike to pause and share his observations, tea mug in hand. When we Mancunians were being shy in stepping into his world and set up a gag, he was patient and full of good humour. His, at first blush, rambling style masks a gifted improviser who can pack in short sharp political commentary.

I enjoyed his tea versus coffee icebreaker, further skit on our favourite brew involving a Texan, country music, racism and gun culture, his gentle ribbing of the Henley on Thames set at a mismatched gig, exposing our class resentments, or the already awkwardness of that first sexual experience that only ends in yet further disgrace. The inflexibilities of his Norwegian friends a clever refrain and reflection of, in his words, our ‘English obstinance.’ 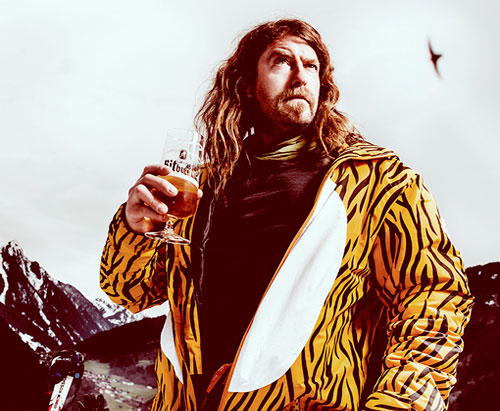 Because he has an endearing quality, the more than liberal peppering of swearing, and, crass asides that fall flat by design, are quickly forgiven. Instead enjoy, the ‘where is he going with this’ moments and his diversions from an anecdote into a musical interlude, Tupac Shakur’s ‘California’ or R Kelly’s ‘Ignition’ – superb and smile inducing.

A lot of the live comedy I have been lucky to see recently has touched on cultural identity and perhaps, not to go too deep here, on a collective anxiety about: ‘are we in or out,’ and, ‘us and them.’ I suspect there is a great book waiting to be written or done, here, in the vein of Dave Gorman’s ‘Googlewack,’ championing diversity.

He is much less the ‘cultural bully’ he labels himself and much more the social observer, who still has, in his 40s a child like wonder for the world, that Canadian innocence, something we could all do with a dose of. You could easily lose yourself in his company over a couple of pints and enjoy being side-tracked by the cool dude behind the manic stage persona. His set time was the most generous that I have been to in some while.

I am glad that amongst us is this generous spirited Canadian, come adopted scone-man, happy to climb over ‘walls,’ real and imagined built to divide people and engage with all strangers great and small. We should all be following him and his infectious energy, and, importantly perch next to him in a pub when he order’s a pint. Our own six year old Mowgli labels all things joyous to him as ‘boomshacker.’ Craig Campbell has this in abundance.