The Boy Who Bit Picasso - The Edge, Chorlton

Untied Artists, despite delivering shows for children, have just got themselves one more fan! I have seen, over the years, an enormous number of children's and TIE theatre, and have even acted in a fair few TIE productions myself, but it has taken me until now to find a play which quite simply ticks every box.

Using three actors and a huge amount of imagination and creativity, and with the young children invited to sit on cushions on the semi-circled front row, this was a masterclass in small-scale touring TIE theatre.

The story, based on the book of the same name, based itself on a true life friendship between a young boy and Picasso, was told in a very easy to follow way, using music, song, storytelling, acting, art, and all the time involving the audience both by speaking to us directly, and by actually involving us - especially the children - in their story in the most wonderful way possible.... designing, creating, drawing with all the materials provided by the company as the story progressed.

The show lasted about 70 minutes non-stop, and the biggest recommendation this company could ever want is that the children were quiet and well-behaved all the way through, attentive and following the story and participated in all the activities, and went away smiling having enjoyed themselves. What these children don't know is that they also might have learnt something too - which of course is the whole idea of TIE {for those that don't know this stands for Theatre-In-Education}.

We learned that Picasso had a very long name, that he was born in Spain but lived - because of a war - in France. He spoke Spanish and French (as he did in the play), and we learned at least one French word - meme, meaning same. And considering this was aimed at 4 years and above, to get all of that, and a lot more besides, across to them was quite incredible. 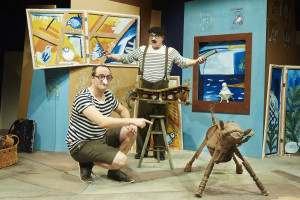 Further to this the audience participatory activities were just brilliant! Creating a bull mask, painting each other's faces on glass, eating woollen spaghetti etc to name just three of several, and what a great introduction to art ( and theatre) for the youngsters!

The show was pitched just right and there was enough in there for the adults to be entertained too. We understood the French, and the humour, even the Picassarole pun (groan!!!), and the whole play ended with a really lovely message - open up your minds, be creative, use your imagination, because everything you can imagine is real!

The company's Artistic Director, Jake Oldershaw, was also playing the role of Tony in this show, and he was helped along the way by Jill Dowse who played his mother and Ed Morris who played a Spanish - French and Pigeon-English-speaking Pablo Picasso. Together they were absolutely brilliant and I really cannot recommend this wonderful company highly enough! Untied Artists are a Birmingham-based company, and this show, The Boy Who Bit Picasso, is now sadly, nearing the end of it's tour, but if you have young children then look out for this company when they next come your way - and make sure you go!

Even the programme was genius! A newspaper, The Surreal Times, which had loads of further activities inside too!

This was my first visit to this hidden and rather off-the-beaten-track theatre in Chorlton, which has an ethos of helping the community, and giving opportunities to those who might otherwise be denied them. It's a very friendly and welcoming venue, but certainly in need of an upgrade. The building was erected in 1885 and it feels as though nothing has changed since, except the price of a cup of tea, which was a very steep £2.00! The theatre itself is nothing more than a church hall, but for such shows as this one worked perfectly. The only problem is that it is up a rather narrow flight of stairs and I didn't see any disabled access.