As all good teachers know, you should always try and find something positive to say first before pointing out their failings. In this instance, the family Christmas offering of Grimm's Faerie Feast, presented by Proper Job Theatre Company at The Met in Bury, finding the positives wasn't the problem; it was being surprised and disappointed that there were so few positives on offer. However; I did like the IDEA. The concept, no matter how badly and ineptly executed, was a good one. The acting, at least from the two brothers and the Baron was good and consistent, and the musicianship of the whole company was proficient.

OK; hold on to your hats, this is going to be a bumpy ride!

It is being advertised and marketed for ages 5 upwards. I would strongly disagree. The style of presentation and content of the show was not age appropriate at all. I don't mean that there was swearing or sexual innuendo because there wasn't; I just simply mean the language used, the verbal jokes and the whole way in which the show was presented was very adult in its concept and directing. I was close by two 5 year old children for majority of the show, and you'd lost them right at the beginning and they never came back to you. You also lost majority of your audience members at various points throughout only briefly managing to engage with them when there was some daft slapstick routine or they were asked to try something to eat. The singing was far too adult and didn't capture the children's imagination or interest, and even though the script was actually quite clever, and there were many references to Grimm's fairy stories, the vast majority of the dialogue went above all the children's heads.

The performance then went a little like this; Waiting, waiting, and waiting!! We were an audience of, I didn't count, but I reckon somewhere in the region of 120, and first of all we were all asked to wait in the small and uncomfortable foyer of the theatre, which has seating for three people. We had to wait there until about 15 minutes prior to the start of the show, which meant that the vast majority of us were sardined in this small space all wearing winter coats and all not really very happy. Once we finally were allowed to go upstairs and our tickets checked we were all ushered into the upstairs foyer. I don't think we all managed to fit in... Some adults stood outside, allowing their children to see. What we had was a make-shift performance space consisting of a keyboard made to look like an oldie-worldie barrel organ and a box stand with a microphone. There were members of the company dressed in black with medieval style tabards who simply acted as ushers, and there was a drinks stall where one could purchase beverages. Not one of the cast spoke a word. No-one said anything. Not even why we were waiting. We simply waited. The children got very bored. We waited some more, and the children got even more bored. At 5 past 3:00pm [it was a 3pm showing] one of the tabarded ushers asked if all the children could come to the front. That in itself was a silly thing to ask at this point... all the children are standing next to their parents and there isn't any spare room at all in this crowded space. So it took some time for the little ones to squeeze their way through. During all of this waiting the heating - and there were two large radiators in this foyer - were on full!! We ALL were still wearing our winter outdoor coats.

The show finally started, and we had to stand, squashed together in this heat to listen to the first part of the presentation in this foyer, which consisted of an introduction to the story which none of the children paid the slightest bit of attention to and a solo song by the Lady Hungry, which was, at best, passable. And what on Earth was the idea behind using cod French accents? That simply did not work on any level.

We were then split up into two groups, "sugar" or "spice" as indicated on your ticket. I couldn't find my ticket at this point, having taken my coat and my jumper off and had these over my arm along with programme etc, the ticket had been lost in the melee so to speak. So I joined the group that stayed upstairs, whilst half of the audience were asked to walk back down the stairs again the way they had come, to visit the basement. Our group were ushered into the Baron's Bedroom, an anteroom on the side of the foyer, which had been decorated as what might best be described as a walk-round installation.

A bed, empty and unmade, a wardrobe with some old clothes and a dead winged body on top of it, a hat stand with a dead winged body hanging on it, an armchair and a mantelpiece all decorated as though it had not been lived in for a long time with leaves and twigs all over the place. However, was this supposed to be 'scary' or 'spooky'? If it were then it simply wasn't. There was no 'atmosphere' at all. Sadly the room was not large enough for all of us, and so we moved in and out freely. We were told we should try and find three things in the room, but people had to ask again, and the kids soon got tired and bored of this. There was also a small poster stuck to the back of the wardrobe inviting the children to find a pair of the Baron's underpants and see how many children could fit inside. The notice was too high up the children to read, and no-one pointed this notice out to the adults. Back in the foyer there was a table set up for the children to draw and crayon once they were finished in the Baron's Bedroom. There were more takers and much more interest there than in the actual presentation. The children were BORED. The actors and the presentation was not engaging them!! The actors failed to tell us anything, except that yet again we had to WAIT!! Again we waited, and waited for a long time for the other group to come back upstairs so that we could continue our search for the Baron! By this point, all the adults had had enough! The parents were expected to look after, prompt and encourage their children to do the activities whilst the actors simply stood and did absolutely nothing, explaining nothing!

Finally we were allowed to descend the staircase and go into the basement in search of the Baron. We entered the Studio theatre, and the children were encouraged to sit on bails of hay at the front whilst we took up seats in the auditorium. Ah, at last! Maybe we are going to see something properly now; maybe it will be funny and engage the children properly; maybe all our complaining has been in vain. - Or there again, maybe not! The heat in the studio theatre was unbearable, and we were there for a long time! As I said right at the beginning the actual acting itself from the two protagonists The Grimm Brothers, Wilhelm and Jacob { Chris Elderwood and Brendan Weakliam } was actually quite good. But it was not age appropriate and with a style of acting and directing that was, in the main, going way above the children's heads, it is not what these people had paid their money to see! The only real engagement from the children here came with the two characters appearing behind Grimm, but he ignored the audience completely, and continued his very adult monologue! We were also given morsels of food to eat at this point too. What could have been a very interesting and completely different idea, fell totally flat. Again by the way in which it was presented. We could eat a wood louse and a wood sandwich. [These were simple confectionary items and small pieces of tortilla]

So after yet another song and dance routine that was way too adult for the 5 year olds to comprehend - and why oh why were the two brothers speaking in Irish brogue?!! - we were finally allowed to leave the room that by this point was nothing short of a sauna, and go back upstairs to join the other group again. 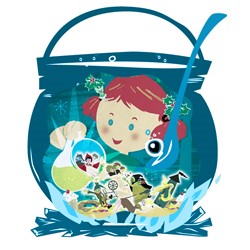 For the final part of the presentation we all came together and entered the Baron's Dining Hall for the feast. Finally a set that looks good; finally some organisation and help from the tabarded ushers; finally something to praise and be entertained by?? Well, no, not really! Once again, the acting, and the premise were both good; and once again this failed to deliver simply because of the way it was directed, the dialogue and the style. It simply did not connect with the children at all!! Even a central section where they told the story using a shadow puppet idea failed to deliver. I think the adults were probably more interested here since the mechanics of the shadow puppetry were visible to all, but for the children, once again simply failing to entertain or engage! They were ALL bored!! ALL asking what was happening, or simply couldn't care. Again it was too hot, and this section of the production went on too long. It was far too wordy, the songs didn't connect or entertain, even the final piece-de-resistance of a Baron that blows up and a blow-up apple tree failed to enthral and delight. It was a huge anti-climax.

The show ran almost 2 hours - including the waiting and walking - without an interval, and really without any real explanation as to what, where or why. These things were explained to you by the main actors, in song or verse, but if you weren't paying attention - which most of us weren't for all the reasons aforementioned - then you were left somewhat in the dark. The presentation does not in any way capture the imagination and inspiration of the target age group. The directing, language, acting and style is all far too adult for the target age group, and the amount of waiting and faffing about loses the audience's interest and enthusiasm very quickly.

Looking at the children's faces and listening to their comments very carefully throughout the whole experience, they went from being fascinated and interested in the projected dragon on the staircase before the start of the show, to being utterly bored, fed up and completely disinterested.