Over the course of one hour we were given an insight into the little known country in eastern Africa of Ethiopia, and the country's last King, Haile Selassie; starting from his imperial all-knowing unquestioned authority to his overthrowing, imprisonment and suspicious death. This was presented in the form of anecdotes from the people of the court who worked with him and knew him. These people were brought to life by Kathryn Hunter, who despite her advancing years, showed incredible athleticism and flexibility as she contorted herself into the different people she portrayed. It also has to be said that I am not a fan of gender-blind castings, but had I not looked at the programme I would have been unaware that the performer was anything other than a man.

The transformations were swift and flawless, with a simple change of gesticulation, body language or accent, little else, and with some well-placed humour, Hunter gave both an engaging and informative insight into a world, and continuing problem, which has been forgotten since the mid 1970s. 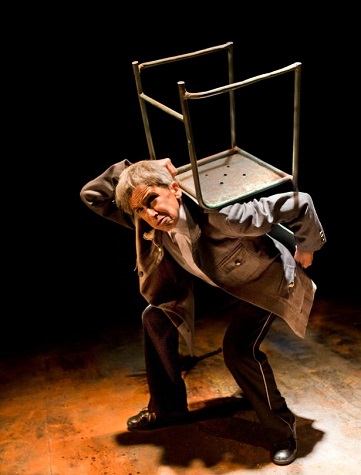 Haile Selassie was hailed both as hero of the Ethiopian people bringing modernisation, industrialisation and innovation to the country, and also the enemy of the people by taxing the poor more and more to pay for all of this, and causing a huge rift between the rich and those reduced to begging, while he supposedly hid wads of bank notes under his floorboards. The world would have been unaware of the gravity of the situation if it hadn't have been for a TV documentary made by Jonathan Dimbleby in 1973 for the BBC.

With her on stage was a one-man band musician / singer (Temesgen Zeleke) who played what I can only assume to be traditional east African instruments and spoke and sang in (again an assumption) The Amharic language.

There was no set per se, just a couple of chairs and a white curtain, which worked well. Having such a large and bare stage with only one performer on meant that all our energy was concentrated on that one performance, and, you might also want to think that this made a nice metaphor for the emptiness of the Royal Palace and the end of an era. What didn't work so well for me was the rather laboured and dramatic use of strobe and gun fire sounds half way through. The narration of this sequence would have been more poignant without such an obvious device.

Presented by HOME (Mcr), in partnership with The Young Vic and Les Theatres De La Ville De Luxembourg, The Emperor by Ryszard Kapuscinski (adapted by Colin Teevan) makes for an engaging hour's theatre, although at times it did feel a little bit more like a lecture than a play. The production was directed by HOME's resident Artistic Director Walter Maierjohann, and to my mind is one of the most mature and sensitive pieces of directing I have thus far seen from him.