Take A Flight Back To Saigon At The Castleford Phoenix Theatre

THE HEAT IS BACK ON IN SAIGON!

With the London production having now closed after a successful return to the West End we are once again without this stunning show on a British stage. But don’t panic, The Cast present their second major performance of the year with the stunning musical - Miss Saigon - Schools Edition.

In this UK premiere of the re-released show many people consider the best musical ever. A classic love story is brought up-to-date in one of the most stunning theatrical spectacles of all time. In this specially adapted version of MISS SAIGON, Alain Boublil and Claude-Michel Schönberg (the creators of LES MISÉRABLES), along with Richard Maltby Jr, bring Puccini’s Madame Butterfly to the modern world in a moving testament to the human spirit and a scathing indictment of the tragedies of war.

In the turmoil of the brutal ending of the Vietnam War, an American soldier and a young Vietnamese girl fall in love, only to be separated during the fall of Saigon. Their struggles to find each other over the ensuing years ends in tragedy but there is a glimmer of hope and a brighter future for the child of their union. Miss Saigon has so many memorable moments and songs that this will be a show no musical lover will want to miss. Inspired by the multi award winning West End version with the Creative team and some of the cast from last year’s sell out shows of Les Misérables, this could be the highlight of the year at the Phoenix Theatre in Castleford.

Tickets are selling incredibly well as you’d expect for this UK premiere performance with the end of the week looking extremely busy. We recommend booking for the beginning of the run as we are sure once you have seen this amazing company bring this classic show back to life you’ll want to go back again and again. Can you afford to miss your flight?

Miss Saigon – Schools Edition runs at the Castleford Phoenix Theatre from the 26th – 29th April beginning at 7:15pm. Tickets can be bought via www.castlefordphoenixtheatre.co.uk or by telephoning 01977 664566 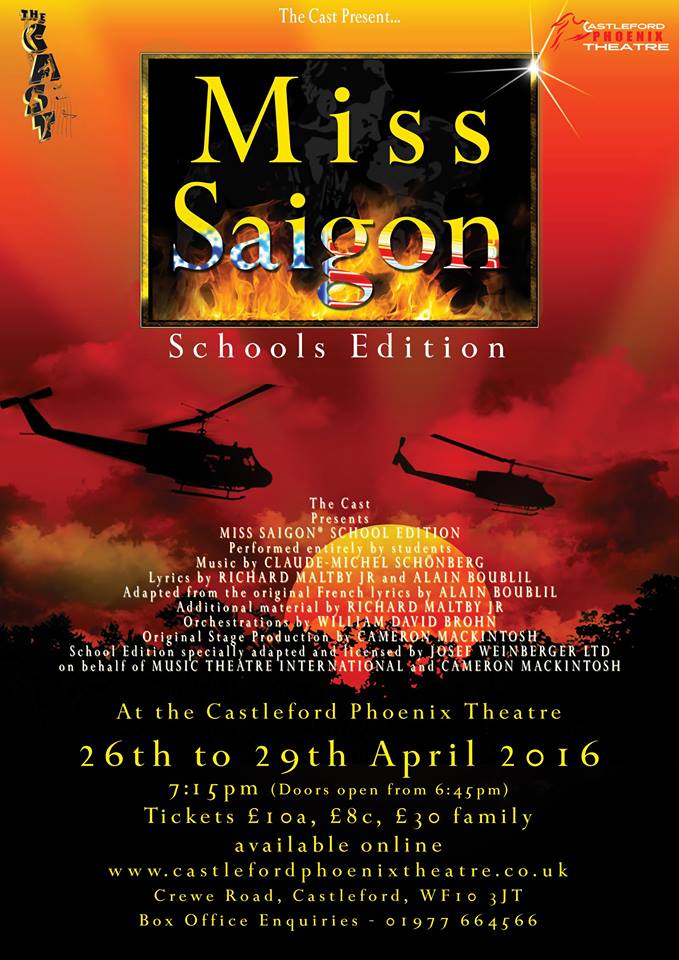