A Ghost from a Perfect Place - The King's Arms, Salford

The event information advertised the play as starting at 7pm, however it was almost 7.45 before proceedings got underway. Despite this the play got off to a good start with A Ghost from a Perfect Place, written by Philip Ridley, being well suited to the Black Box style of the Kings Arms Theatre Space, with the entire performance taking place in the kitchen of a residence in Bethnal Green in the East end of London.

The play was performed by The Unnamed Theatre Company and directed by Andy Pilkington, and consisted of two acts of approx. 55 minutes each.

The space, whilst perfect in creating the intimate surroundings for Act one, could have been utilised more effectively by having a smaller table, as this seemed to take up a disproportionate amount of space within this first act, and also more thought could be given to where the chair with Travis Flood was placed in the second act to make best use of the power play.

Act one was engaging, with Julie Root as Torchie Sparks, an East end grandma and Liam Grunshaw as Travis Flood, the local Kingpin 'businessman', who ruled the streets of the East end back in the hay day. Both were convincing with their cockney accents, with Torchie fluctuating between her hero worship of Mr Flood and her occasional irreverence of him, mingled with her painful memories of her daughter Donna's death, during the birth of her own child Rio, at the age of 13. Whilst Travis' oozed gangster swagger; basking in the retrospective glory of his own hay days. 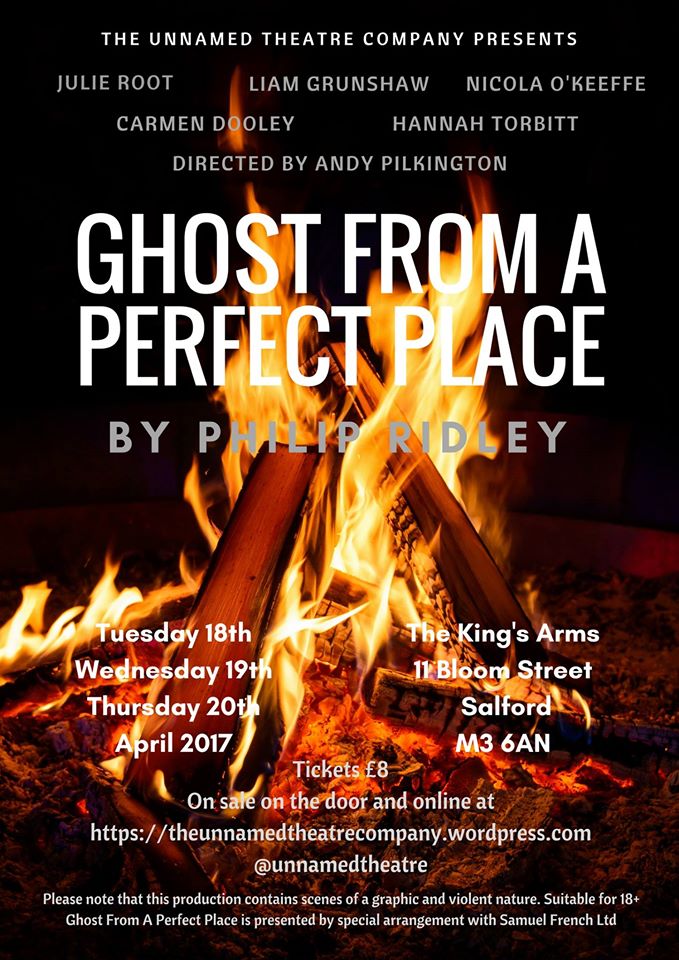 The strength of the play was undoubtabley the 'story telling', the characters descriptions of memories and situations, with the other characters engaging and participating in the memory or situation as though it were a shared experience. Conjuring up the same visual imagery for the audience it held the story together, providing a context for the scene before us and the lives that the characters had lived or wanted us to believe that they had lived. In parts this created an often romantic version of events from bygone times.

Sadly Act two was a disappointment. The girl gang the 'disciples of St Donna', Rio Sparks mother, were unconvincing. Their comical appearance made the girls come across as silly and irritating, a far cry from 'savage, bloodthirsty followers' as described in the programme.

Whilst the script explained that their appearance played homage to the fact that 'St Donna' had blonde hair and wore a gold miniskirt. Donna had been an innocent child of 13, however the disciples came across as caricatures, ‘adult hookers with their blonde wigs and gold skirts that were too short’, as I heard one audience member comment.

The highlight of Act two was the unravelling of the romantic ideal of the hay days, to present the horror of reality. This presented the potential of Nicola O'Keefe (Rio Sparks), especially with the scene where she revisited her mother’s rape by Travis Flood, which was done well. However, the lack of credible support from the actors playing her sidekicks as the 'disciples' undermined the play, with Hannah Torbitt as a one dimensional Miss Kerosene (who seemed to remain screechy throughout) and Carmen Dooley as Miss Sulphur, both speaking very quickly, so some of the dialogue was missed and neither had a plausible East end accent.

All in all a bit of a mixed bag, some areas definitely need more work doing to bring them up to the standard of the first act. However, the good parts are worth a watch!

The play is being performed until Thursday 20th April 2017.