Richard Lloyd’s pantomime version of The Three Musketeers, takes all of the key elements of Dumas’ classic novel, adds some puntastic character names, and plenty of scope for physical comedy and audience participation creating a family friendly show with lots of swashbuckling adventure and thigh-slapping fun.

Directed by Seonnie Sergeant and Zoran Blackie, Woolton Drama Group’s performance of the pantomime is a highly energetic show, which makes use of contemporary political comedy and old fashioned pantomime humour, meaning there are plenty of laughs for children and adults alike. 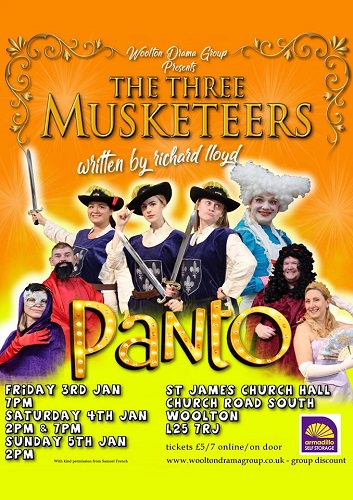 We are introduced to the principal characters by Plonquer (Michael Silverman), a wise-cracking cockney who lives in the sewers of Paris. King Louis XXLVII’s (Paul Arends) wife, Queen Anne (Lydia Windrow) is having an affair with the British Prime Minister, the Duke of Tottenham (Peter Andrew). Her servant, Constant Hoh-hi-hon (Reanne Henesy) is helping to conceal the dalliance, but the wicked Malady de Splinter (Abigail Henesy) is determined to expose the Queen and wreak havoc in the royal household. This is music to the ears of Cardinal Richeleeugh (Mark Duffy) and his henchman Roquefort (Maddie Silverman) who would love nothing more than a ferocious war with England.

Meanwhile, Dartagnan (Hollie Windrow) is living on a pig farm in Gascony with his auntie, Dame Desiree (Mike Sanders). Determined to leave home and join the musketeers despite his auntie’s protestations, Dartagnan runs away to Paris. His furious auntie follows him, but things will not be simple for either of them along the way.

Dartagnan soon meets and clashes with three of the King’s best musketeers, Athos (Victoria Turnock), Porthos (Kathryn Keeton) and Aramis (Teri Duffy), while his auntie gets herself into various scrapes. Will they be able to save the Queen from disgrace, the King from humiliation and, Gerard, the giant snail, from the cooking pot?

A number of songs throughout the performance keep the energy high and offer the opportunity for audience participation during the sing-a-long version of the “French National Anthem”.

Sander’s performance as the essential panto dame is excellent, combining a broad Lancashire accent with good slapstick comedy skills. It is an enthusiastic and charming portrayal which is a lovely part of the show. Arends, as King Louis is also very good, using elements reminiscent of Blackadder’s Queen Elizabeth to show his childishness and spoiled nature.

Silverman, as the charming but sly Plonquer and Duffy, as the hammy but evil Cardinal are both very funny. James Stephenson, playing Zoot a Lors, has excellent comic timing and good improvisation skills, which played to the reactions of the audience.

Windrow and Andrew as the Queen and her lover, the British PM, are fabulous, giving a melodramatic and lively performance. Both make excellent use of French and British stereotypes, to hilarious effect.

The Three Musketeers – Le Panteau! is a fun family-friendly treat to finish off the festive season. Very funny and entertaining, this lovely pantomime will mean you can never hear La Marseillaise again without smiling.