LIDOS (Leeds Insurance Dramatic and Operatic Society) presents an amateur production of Company at the Carriageworks Theatre in Leeds. Sondheim’s award winning musical, based on George Furth’s book, premiered on Broadway in 1970. The musical focuses on Bobby (James Sidgwick), a 35 year old single man, who is unable to commit to a relationship. He associates with his best friends who are five married/engaged couples and has on and off relationships with three girlfriends; April (Mariah Young), Marta (Sophie Ketteringham) and Kathy (Gemma Buck).

Company doesn’t follow any particular storyline but instead it focuses on the characters themselves, none chronologically, after the celebration of Bobby’s 35th Birthday. It is set around the dates of his girlfriends and conversations over dinner and drinks with his married/engaged friends. The common themes, Company is one of the first musicals ever to deal with this, are around adult ones and the reality of relationships.It opens with a catchy musical number Company with reprises throughout.   Robert spends time with couples whose actions clearly see that marriage isn’t really what it is cracked up to be along with being in any relationship. Thoughts and feelings expressed in Joanne’s (Janine Walker) sarcastic and The Little Things You Do Together and the mocking The Ladies Who Lunch; Harry (Chris Hall), David (Andy Ashley) and Larry’s (Leon Waksberg) Sorry-Grateful and Amy’s (Claire Sidgwick) decision not to tie the knot in Getting Married Today. Each couple’s relationship doesn’t appear problem free when Bobby witnesses his friends and the various issues and challenges the couples face. 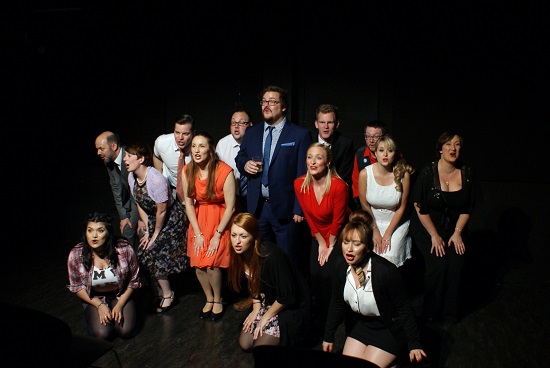 Bobby certainly is valued as a friend with the company’s What Would We Do Without You? at the beginning of the second act even if the couples do not give up their wish to see him married. In conclusion he however bravely comes to terms that being in a relationship with its challenges is worth it for meeting someone who is Being Alive. The live musical numbers are played beautifully by the pianist, Beth Blundell, and the singing and music are directed by Lucy Eyre.

Company is wholeheartedly and energetically performed by this company. The acting, singing and choreographed movements, directed Kimberley Lyon, are performed smoothly in the Upstairs at the Carriageworks studio’s intimate staging space.   The staging is interesting with photographs, framed on the walls and hung from the ceiling, and summarises Bobby’s relationships with the five couples and his casual girlfriends. This is an excellent performance by LIDOS including the cast and its production team.