There is always an air of trepidation in the audience when the curtain goes up for a stage adaptation of a classic movie, because nobody has paid top dollar for an arty version of something everyone sitting here loves.

The good news for fans of this iconic movie is that Dirty Dancing is as billed bringing to the stage all the film’s strange magic scene by scene.

At heart this is a classic example of a cross the tracks love story as Frances ‘Baby’ Houseman, the indulged but idealistic younger daughter of a kind-hearted doctor, joins her family at a twee summer resort in JFK’s America, and through the magic of dance wins her way into the heart and bed of rough diamond dancer Johnny Castle.

In fairness to the producers they have kept in the grittier elements of the movie, set in a gilded time just before Kennedy is shot, and just as the conflict in Indo-China starts to ramp up claiming the lives of a whole generation of poor guys like Johnny. Meanwhile, his dance partner Penny is forced to go to unqualified backstreet abortionist in a time before Roe v. Wade existed. A time that may well be on its way back. 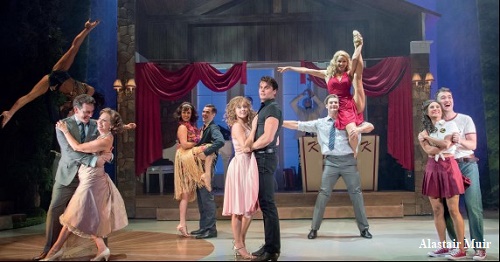 Class inequities in the age of Camelot are key to the plot, and Roberto Comotti’s huge and flexible set smoothly moves the action from the posh side of the resort where the affluent Houseman brood reside, to the rundown huts that a restless Baby strays into as the blue collar staff practice their forbidden dance routines.

Thank God the set is great, as this show contains one the worst special effects I have ever seen as Baby and Johnny attempt to recreate one of the aquatic scenes from the movie, and it rightly prompts a huge belly laugh from the audience. One can only hope it was mean to be ironic.

At times the dialogue felt a bit rushed, especially in the first half, but fans of the movie are less bothered about the subtexts, and more interested in whether the cast capture the celluloid animal magnetism of the late Patrick Swayze and Jennifer Gray.

A slightly mature Katie Eccles is a great mover subtly essaying the feisty, but naïve, Baby’s journey from girl to woman. Totally ripped Michael O’Reilly was the lead dancer with the Matthew Bourne Company and makes a solid acting debut moving well as Johnny, eliciting plenty of whoops when he finally sheds his shirt.

The supporting cast all contribute with old hand Lynden Edwards adding dignity to conflicted Dr Houseman who is seeing his child slip away, and Lizzie Ottley is amusing as Baby’s vacuous sister nailing Lisa’s iconic rendition of ‘Hula Baby’. Alex Wheeler is moving as Johnny’s less charismatic cousin Billy, and Millie Hood confidently steps up from the ensemble as proud Penny surviving the backstreet butcher thanks to Baby’s old man.

The band have plenty to do rotating on and off stage playing an endless stream of classic songs – we’ll gloss over the misjudged civil rights medley - but let’s face it - all roads in this show lead to the climatic final dance. Yes, the lift is completed as the audience joyfully lift the roof off.

No-one would have left the Grand feeling short changed as all the elements that they know and love were executed with care and passion by actors who know what this show means to people paying good money to have the time of their lives.

Dirty Dancing is at Leeds Grand Theatre until Saturday 17th August. To book www.leedgrandtheatre.com or 0844 8482700