Adapted from the 2003 novel by Afghan-American author Khaled Hosseini, The Kite Runner, (adapted for stage for its premiere in 2009), tells the story of Amir, a young boy from the district of Kabul, in the mid 1970s, whose closest friend is Hassan.  As a young boy Amir’s father (“Baba”) took Hassan into his care following the tragic death of his own mother.  The story is set against a backdrop of tumultuous events, from the fall of Afghanistan’s monarchy through the Soviet military intervention and the exodus of refugees to Pakistan and United States, and the rise of the Taliban regime.

Following a successful run in the West End, The Kite Runner is currently touring the UK, with northern venues including Sheffield Lyceum (October) and Leeds' West Yorkshire Playhouse, opening Tuesday 19th September.   Although I admit I haven't read the book, nor have I seen the film version, I went along to WYP last night to see what all the fuss with regards to the book is about.

Although for me I felt it was slow to get going, I was soon on a rollercoaster ride of emotions as we met main character Amir (David Ahmad), narrating the story as the older character in the early 2000s and taking us back in time to the beginning of the story in the mid 70s, often “stepping in” to the scene so to speak and reverting back to the mannerisms and voice of a young adolescent boy and stepping out of the scene at parts narrating as the older version of himself. 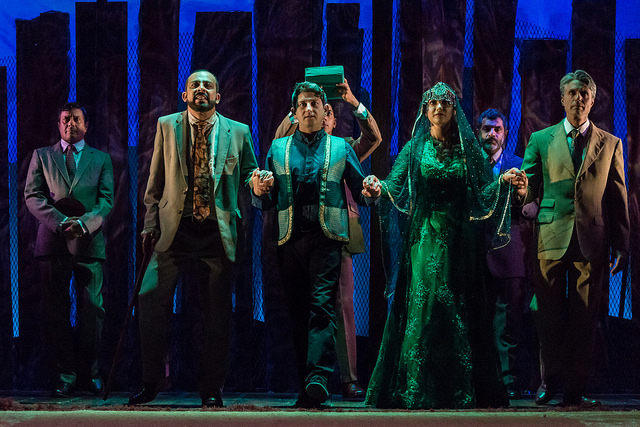 Earning his keep as a loyal and obedient servant to the weathly Baba (Emilio Doorgasingh) and his son Amir, in repayment for being taken in as a young orphaned boy, Hassan is still treated like part of the family (“Baba NEVER forgets his birthday”), young Hassan is more of a best friend to Amir than a servant and the two young boys are inseparable.  They spend their childhood days (pre Taliban) flying kites, and competing in competitions.  Hassan is an excellent kite runner and usually always wins against the other kids.

When Amir witnesses a brutal attack on Hassan by a group of boys, he does nothing to intervene and tells no one of what he saw.  Part of him is envious of his father’s relationship with Hassan; Baba dotes on Hassan and treats him like one of his own.  After the attack, the friendship between the two is visibly strained and when questioned about it, Amir still says nothing.  When war breaks out, Baba and Amir flee Afghan leaving faithful servants Ali and Hassan behind, and head to Pakistan, before setting up residency in the United States.  There Amir and Baba go from a humble home and servants to refusing welfare handouts and starting from scratch.  Years later, Amir learns a secret about his past, and desperate to repay his debt to Hassan, travels back to war ridden Kabul to rescue Hassan’s son, but is faced with danger when he's stopped in his tracks by the very same guy that was responsible for the attack on young Hassan.

Although the stage setting is minimal, I still felt very much there amongst war ridden Kabul and later, a happier life in the States.  Hanif Khan provides the majority of the music, seated on the stage floor with drums, occasionally with added music from the ensemble in the wings, which adds a certain ambience to the story and works perfectly with the storylines.  One of my favourite things of the performance is the fantastic projections (William Simpson) used throughout, which really helped set the scene and had some fabulous art work involved.

The Kite Runner is a powerful, moving and tear jerking story, and this performance is most definitely the best play I've seen in years.