I like Shakespeare. I also particularly like Macbeth. I have seen numerous versions of the play, some excellent, some less so, but all featuring significant sized casts, sets, props and all the usual “gumpf” that goes with a production. So, to say that I was a little dubious about a three handed production of this play to be performed in one act inside an hour.

Upon arriving in the space, it was clear we were not going to be treated to sets or props – the stage was a bare black box with the main staging area marked by a semi-circle of rope. The cast were already on stage, interacting with the audience and “appointing” (and rapidly dispatching) leaders. Good fun, but a slightly odd introduction to a tragedy.

The three cast members (two male, one female) wore white(ish). Costume was present but nondescript. No period, no location, no idea how that would fit into the production. Oh, and they all had hats. Odd hats. 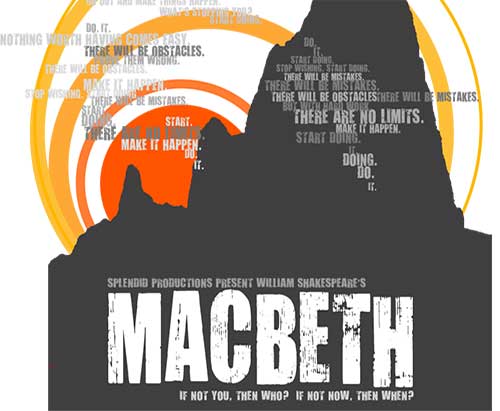 Come 8pm, and the production proper started and immediately it became clear that this would be a very different production than any that I have seen before. This was, without any doubt, a masterclass in performance from start to finish. Scenes (and dialogue) from the Bards work was interspersed with self accompanied songs and presented almost in a storyboard format with cut scenes explaining where we were headed next (making use of interesting invisible placards). Differences in character were helped either by removal of the aforementioned hats, by the addition of a red sash (the only bit of colour that appeared throughout the piece) or by physical performance – adopting posture, stance and adding accent to distinguish between, for example, Banquo and Duncan.

The physicality of the performance was exceptionally strong, particularly the fight scene between Macbeth and Macduff. Voices were clear and strong, both when in Shakespearean mode and when dropping back into more common conversational English. The cast used the space well, slipping into the rope marked stage or into the audience at ease. The ability, in a simple way, to produce emotion was strong – particularly so in the song of Lady Macduff which was chilling at the end.

A word on the performers, Scott Smith, Genevieve Say and Mark Beirne. You couldn’t separate these three in terms of strength of performance. They were all equally talented and delivered phenomenal performances. Smith carried the burden of Macbeth – something that he applied himself to throughout. The challenge of both ladies was admirably met by Say, again particularly poignant was her Lady Macduff at the point the Macduff stronghold was surprised. Beirne covered the majority of the other roles, particularly those who ended up dead, and again delivered assured performances throughout.

A thoroughly enjoyable hour of top class theatre that I can strongly recommend to anyone who can catch it on its tour.