The Regent Theatre Stoke and First Family entertainment have paired up again for another magical Christmas Pantomime. This year in the form of the beautiful children's tale Peter Pan, this year’s panto was colourful, comedic and captivating from beginning to end. The show opened with a beautiful London Sky line flying scene with Peter flying over the houses which was greeted by oohs and ahhs by the children and adults alike.

The buzz of panto was well and truly present from entering the theatre you were greeted by pirate ships, a red carpet and twinkling lights a real place of childish laughter and happiness that could be felt by all.

The script was hilariously funny full of everything you'd expect from a classic panto with some jokes thrown in for the adults too which went over the heads of the children but had adult members of the audience almost crying with laughter. I actually think

I had stitch at some points in the show the script was adapted by Christian Pattersion who also directed with co-star Johnathon Wilkes and starred in the show. He did a brilliant job of the script.

The title role was played by Shannon Paul Lane who was whole heartedly the embodiment of Peter he had a certain naïve adorable charm surrounding him that made him so endearing to watch. His acting style was perfectly boyish but he portrayed his love for Wendy beautifully, his vocals were smooth and stylish and he leant himself too many songs throughout the show but the highlight of his performance was most definitely Rule the world by Take That. He captivated the hearts of people in the audience more and more with every scene and I'm positive he will make it very fair in theatre as his performance was outstanding he's one to watch, 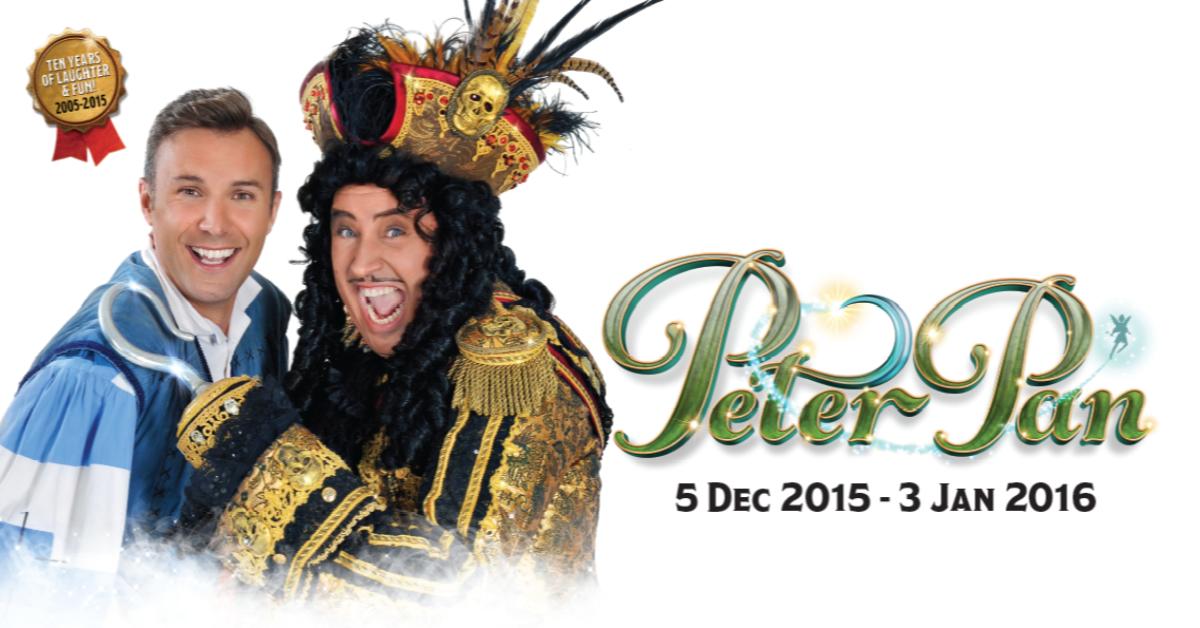 Wendy was portrayed by Yasmin Wood who gave a very convincing and delicate performance of the young girl she had extremely strong vocal ability and again leant herself to many songs during the production she gave a very motherly performance over the two young boys playing Michael and John Tyler Stubbs and Conner Richardson who gave an incredibly sweet and energetic performance of the Darling boys.

The three real stars of the show were Christian Pattersion, Amanda Coutts and of course Johnathon Wilkes. For any Stokie you will be very aware of the hilarious duo of Pattersion and Wilkes who've worked together for 8 years on Pantos. In Stoke this year the pair took on the roles of Hook and Smee. Together they make the most perfect duo to quote the show they are like ‘each other's shadow’ a Regent Theatre panto would never be as entertaining if not for these two they lighten the show and have everyone in the audience crying with laughter. Their friendship shines through everything they do which makes the show even more endearing as it gives such a homely feel and warms the heart. Pattersion even makes you love the character of Hook as in everything he does he's just truly side splittingly funny. Wilkes holds the audience in the palm of his hand the whole show everything he does or says the audience completely adore he is the epitome of Stoke and that's why the audience feed of him so much as he is just like every other Stokie. You actually love the baddies in this panto which is unheard of but with this pairing its hard not to.

Now on to Coutts as Tinkerbell. Wow is all I can say just wow! She portrayed the role on Rollerskates which was innovative and incredible to watch she did many tricks whilst on her skates and wasn't at all surprised when I saw she had been in Starlight Express. The script played on her Essex accent perfectly and her vocals were flawless throughout especially in the Wicked classic Defying Gravity which closed the first half she got the stroppy side of stink perfectly and the scenes between herself, Wilkes and Pattersion were the standouts of the show.

The chorus of the show were brilliant leading themselves to many different roles and the blue team which played the lost boys were superb.

For any panto lover this is definitely not one to be missed it has all the charm of a traditional panto and a wide array of music to please everyone. It tugs at the heart strings and makes you cry with laughter I loved it that much I’m looking to go again.