A sly charming manipulator? A master of twisting truths? A divided nation? Sound dreadfully familiar? Who says Shakespeare’s plays aren’t relevant anymore? Headlong Theatre’s timely touring production of ‘Richard III’ succeeds in delivering a resonant vision of a soul corrupt in the pursuit of power with an incredible lead performance.

Tom Mothersdale is astounding as Richard. He holds an utterly compelling vampire like charm as he prowls, spits and lurches, sometimes lingering on the edge of the stage. His command of Richard’s soliloquies are hypnotic making us feel absolutely complicit in the horror; we are yet another of his looking glasses as he holds us in his gaze. 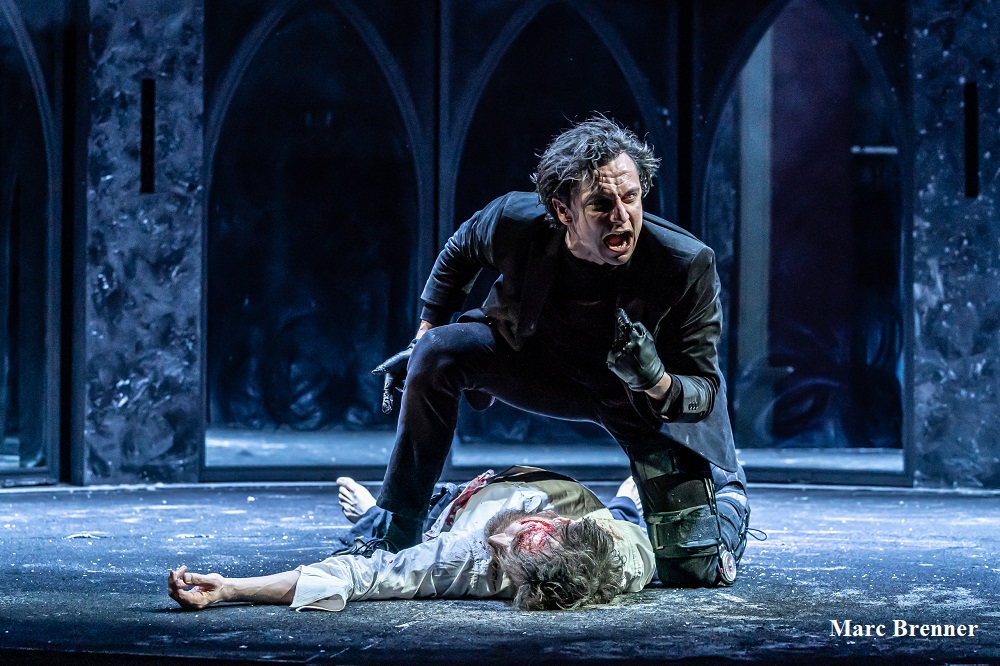 Mothersdale is astute at slight movement to demonstrate both Richard’s vulnerability and brutality, such as when his nephews touch his back playfully. Later he chews up the notice that his nephews have been murdered at his request; everything and everyone is disposable. John Haidar’s direction excels in teasing out Richard’s misogyny, first in his wooing of wife, Anne, and in his relationship to his mother who also despises his appearance as much as he does.

The linguistic skill of the cast to deliver the rich intricacies of Shakespeare’s text is commendable but more importantly, it is makes the drama accessible. Stefan Adegbola shines in his articulation of Buckingham, with echoes of a spin doctor enticing the audience before the interval.

Electronic sound, with flashes of red lighting is used to punctuate the violence; it literally jolts you as though you were witness to an abattoir scene and aids the dramatic tension. Chiara Stephenson’s set design isn’t afraid to use castle imagery that we may expect with a Shakespeare play. It is a stage which feels claustrophobic, the use of the balcony carefully used, reflecting the private world Richard has created around him.

Yet the use of mirrors by Stephenson enhances the duplicity of Richard’s nature and the different versions of himself that he presents not only too others but to himself. Towards the end of the play, they serve as a visible conscience; those who have been murdered in the name of gaining and maintaining the crown. We witness Richard’s sense of self disintegrate, in frightening physical form, as he sees the vision of those murdered laughing at him as those he were in a house of horrors.

A haunting final image of Richard ends the play. Framed by bright white light, his body contorted in pain, it held a visual tragic intensity that has shades of a Francis Bacon painting.

Anyone put off by the thought of a Shakespeare play, should think again. This production is what live theatre is about; engaging, intense, drawing you in until the curtain drops, leaving you breathless.