Tim Etchells’s Real Magic takes us on a cyclical journey that goes nowhere and achieves nothing, yet is somehow utterly mesmerising. Glued to our seats both by disbelief and bizarre anticipation, we witness the maddening repetition of a single scene from a game show that is impossible to win. Like hamsters in a wheel, the host, the contestant and the sidekick are forced to participate in an extravagant mind-reading exercise on repeat, swapping roles with each completion of the circle.

If nothing else, Real Magic is a masterclass in acting, with virtuoso performances from Jerry Killick, Claire Marshall and Richard Lowdon. Instant shifts between personalities, energy levels and power structures are handled with skill and dexterity.

Surprisingly, for a play that revolves around repetition, it said to me that no moment can be experienced twice. The variety was genius. An endless cycle of a single scene creates limitless possibilities, transformed simply by a change of costume, body language or tone of voice. From comedic bewilderment to utter despair, a spectrum of emotions is exhibited on the malleable faces of the inconsistently self-aware Jerry, Claire and Richard. 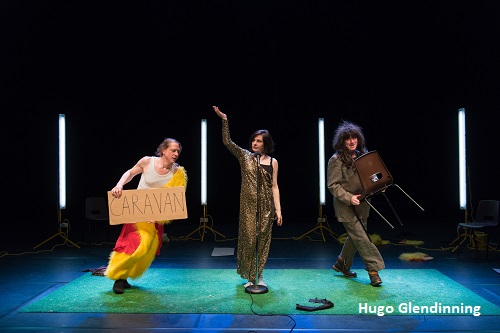 Real Magic speaks to our craving for resolution as it disrupts expectations we didn’t even realise we had. After the first agonising ten minutes, I accepted the first break from convention: narrative. There would be no progression, no development, no change. Yet once the “what will happen” question is abolished, the why is this happening naturally takes its place. But no—again we are denied another convention: meaning.

So why are we here? Is this entertainment or just indulgence? From the reactions of some people around me it seemed like a form of torture. And yet there is laughter throughout the theatre. A lot of it. It’s hard to know what exactly we’re laughing at. Perhaps it is the absurdity, the self-awareness, or the deadpan mockery.

We laugh because it’s meaningless, because it’s harmless – quite like game shows themselves, like reality TV in general. Laughter at unknown people struggling, failing, or exposing themselves is acceptable through the screen, as it is on stage, apparently.

Real Magic seems to lay bare an uncomfortable truth that we revel in others discomfort, in seeing them fail or embarrass themselves. For much of the performance at least one actor is in their underwear, in between costumes—sometimes brazenly open, sometimes painfully self-conscious.

This is when the sound design not only supplements but adds another layer; as the looped chorus of applause and laughter falls out of sync with the action, it becomes slightly demonic, unpleasant, and inappropriate. Likewise, just occasionally this single scene slips from comedy into dystopia, before snapping straight back into harmless mockery.

As many have recognised, notes of Beckett flow through this performance, from the emptiness to the absurdity. But the similarities run deeper than this; one thing Real Magic forces us to do is to observe the complex and extremely varied workings of social relations – of mannerisms, reactions and speech, and ultimately of our experience of each other. Etchells, like Beckett, focuses on the trivial, drawing out the comedy that arises from despair and putting failure in the spotlight.

But Real Magic is by no means just an imitation of Beckett’s style: it is fully contemporary. It is designed to stir a reaction, to disrupt our way of thinking and look intensely at one bestial example of showbiz. One moment I was analysing all three sets of actors’ knees, the next I was pondering the hollow core of contemporary screen culture, seemingly harmless entertainment created for mass consumption. Was this the intention?

Occasionally we’re teased with snippets of potential commentary or argument; we treasure a few select words about money or a change in the intonation of “Feeling safe?” before this is again overridden by absurdity… the chicken dance was a personal favourite.

Be it a frustrating 85 minutes, this production is never boring. Real Magic is brilliant, undoubtedly, just please don’t make me watch it again.

Catch the last two performances this week at HOME, Manchester: