Is Trying Enough? - The Empty Space

‘Is Trying Enough?’ written and directed by Melissa Hale a student at the Liverpool Institute of Performing Arts delivered her play as a part of the Greater Manchester Fringe at Salford’s Empty Space Theatre.

Hale’s 40 minute play was written four years ago and she states “this play was written to inspire and create a piece of theatre in which the audience can see a true depiction of how some people aren’t given the best of starts in life, but still do the best they can with so little they have “.

The piece follows three siblings – Jay, Lou and Tommy acted by three fellow students from the Liverpool Institute of Performing Arts Cameron, George and Megan, each admitting that their roles were challenging as they connected with their character to bring them alive on stage. 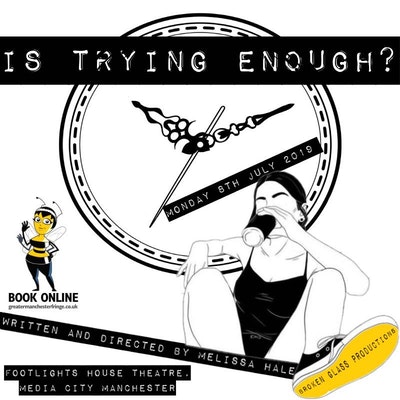 The set is based around a living room that is occupied by young adults with no parents present to guide them on the basic housekeeping with empty boxes and trash strewn around the room whilst they sit down eating crisps and drinking cans of beer.

Hale has created a script that clearly aims for full impact covering issues of grief, financial hardship, accidental death, abuse and suicide within an extremely dysfunctional family in the space of 40 to 45 minutes making it a little ambitious to deliver the impact I believe she was aiming for.

The story has some great authenticity and the script is well written, I certainly could see this as a longer mainstream play that would create the dialogue and time needed for the maximum impact of such difficult scenes and emotions.

There are some poignant messages Hale portrays throughout her script and the ethos is correct ‘time is precious’ and we need to enjoy as much of the ‘middle of our lives’ as we can before we reach the end.

‘Is Trying Enough?’ has great potential but sometimes I believe less is more and reducing the amount of events and concentrating more on emotions of one or two situations may have had a stronger impact as I found myself still reeling from one event then another came directly afterwards giving the audience little time to catch their breath.

I wish the team well for their future runs and well done for all the time and effort put into this production as the crew have worked extremely hard to create this new piece of theatre, there was some solid acting from all three members of the cast who created the roles of the siblings.

Special mention must go to the suicide scene which was executed brilliantly by the two members on stage.

Fantastic delivery of sound and lighting from the team definitely enhanced this piece of work.

Verdict: This play has great potential in the future.