Truant Company present a play about one sort of bullying whilst a completely different and manipulate sort of bullying is happening on stage. Clever, and very powerful. The play is incredibly well written and perceived by Billy Cowan, and uses all the modern up-to-date terms and; procedures (maybe he is a teacher himself?). The only fault with the writing is that it offers no surprises. It goes exactly where you think it will, and does exactly what you expect it to.

I don't want to spoil it for you - because to be honest - this is a piece of Fringe theatre that is actually very worthy. Sadly, Fringe theatre is becoming more and more a synonym for average and uninspiring. However, the play is set in the office of the deputy head of a inner city comprehensive school, and it shows the growing tensions, emotional traumas, and down-right common sense practices set in place for such an occasion, when a young teacher just at the start of her career comes in to air her concerns about one of the pupils in her class being bullied.

In the 55 minutes which follow we play emotional and rational ping-ping. Yes we know that this needs attention and that something has to be done to broach the subject and try and rectify a potentially explosive situation, but we also know, as rational adults, that there are protocols we have to fulfil, forms that have to be filled in, quotas we have to maintain etc etc - and further more, the deputy head is on the short list for the headship and of course doesn't want to blot her's or the school's copybook at such a time.

Things go from bad to worse - the situation escalates and the young teacher feels impotent because all her requests, suggestions, observations and concerns are being ignored and negated, and now the deputy head has been offered the headship. Her own sexuality is brought into question, her own motives for wanting this to be addressed also questioned. Tensions are high, and tempers fly, and so she feels she has no alternative that to lodge a compliant to the head about her. 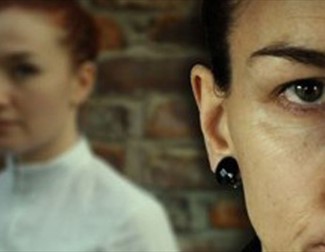 I won't say more, for to say more would spoil the story. It's a very good story and poses ethical questions which indeed do need to be addressed. But not by us, by those capable of affecting change. The writing is full of memorable quotes, the one which advertises the show is actually the show's key, "Those who stay aren't the ones who care", but my favourite was, "If it's unpredictable it's unpreventable."

The acting was of an exceedingly high standard. Both actresses putting their all into these rolls and reaping the dividends. Powerful and real performances. Penelope McDonald played Mrs. Rutter, the hard-nosed, in-for-the-duration, whatever-is-best- for-my-career Deputy Head, and playing the exact opposite; a caring, down-to-earth, newbie, desperate to help, Miss Lawson was Emma Romy-Jones.

It was directed with great aplomb and sensitivity by the writer, Billy Owen. The only criticism I have is of the between scene interludes. I didn't like the two sat rigid and motionless as the audience walked in. It added nothing. And I certainly didn't like the strange noisy music, red lighting and walking around the perimeter of the office between scenes. Again it added nothing and really jarred. It was a very different directing style to the realism created once they were inside the office.

Tonight was the first night of the tour and so catch it while you can. It will be at The Lowry on the 22 and 23 April. I can heartily recommend it.