Since the show's initial conception in 2003 it has had many variations, the present show has the added appeal of Ella Fitzgerald joining the testosterone fuelled boys of Frank Sinatra, Dean Martin and Sammy Davis Jnr on stage. With a simplistic and effective set with 10 musicians on a platform, and the Musical Director /pianist on the main stage we are transported back to an evening at The Sands hotel, Las Vegas as Frank Sinatra played by Stephen Triffitt takes to the stage.

Triffitt's performance is compelling; with a very authentic vocal and idiosyncratic phrasing style; as he opens the show with the Guys and Dolls classic musical number 'Luck be your Lady tonight' followed by the Cole Porter master class of 'I Got You Under My Skin'.

The boyish banter began as soon as his close friend Sammy Davis Jnr played by David Hayes joined him on stage. Hayes grew into the role and had the typical 'Sammy' feel, an easy style with the audience and a great vocal. However, the important factor of Sammy's amazing ability to dance was sorely missed. 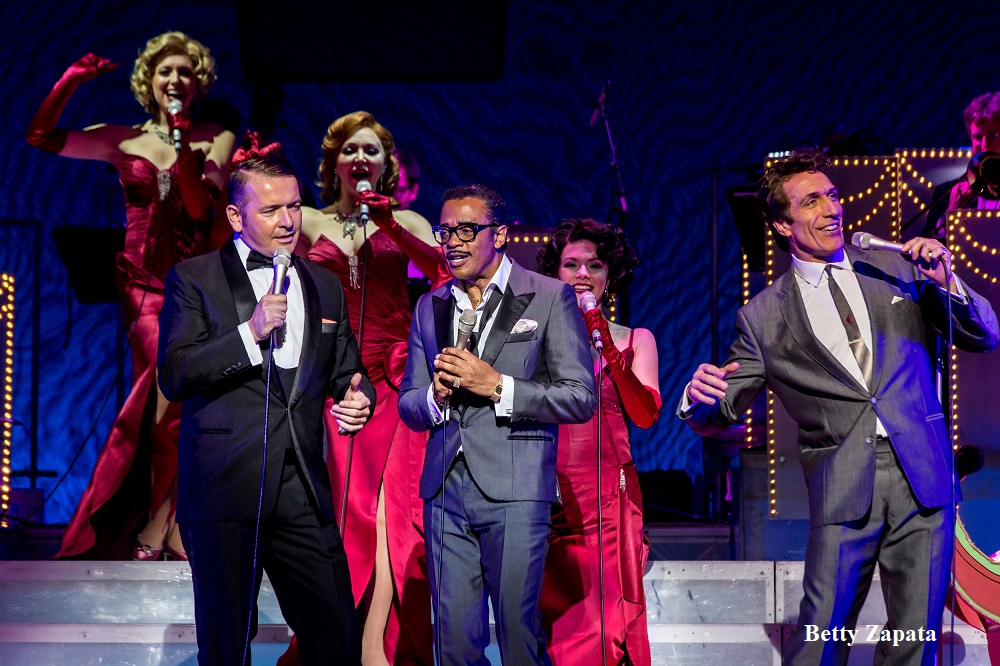 Surely, with such an array of triple threat talent out there, the casting was amiss? Mister Bojangles, probably Sammy's most well known song was crying out for some soft shoe movement unfortunately, although a beautifully emotive rendition; the dance didn't materialise. Hayes although a strong performer, lacked the exuberance of Sammy Davis Jnr.

The Burelli Sister's (Amelia Adams-Pearce, Laura Darton and Joanna Walters) were added to the mix as a fictitious singing floor show, to add to the glamour of the evening. It has to be noted these girls had superb harmonies and were very well rehearsed choreographically. Their rendition of 'It Don't Mean A Thing If It Ain't Got That Swing' had the real Wow factor.

Finally, the third member of the Rat Pack took to the stage, drink in hand and as smooth as you get. Nigel Casey's portrayal of Dean Martin was the stand out performance for me. His voice and persona were incredible. His comedic timing was perfect and his steady decline into a drunken, bumbling, but humorous, drunken stupor was genius. His versions of 'That's Amore’ and 'Sway' with the Burelli Sisters were classy and thoroughly enjoyable.

By the second act The Rat Pack were in full swing on stage, their banter was full of racist, sexist and homophobic jokes poked at each other, from a more naive era. After the initial gasps from the now politically correct, audience, the laughter began as they remembered this was a throwback to a bygone era. It was noted that several of the racial segregation gags, that highlighted the struggles Sammy Davis Jnr was still experiencing at this time, were missed by the audience.

Towards the end of the show Nicola Emmanuel was invited on stage as the legendary Ella Fitzgerald. Her voice was rich and bluesy and her duet with Phillips of 'Lady is a Tramp’ was my highlight of the show. A unique blend of blues and swing. However, I do feel that Emmanuel's asides with the audience and cast were weak and lacked confidence in comparison to the rest of the cast.

The show overall, was very well received, the lighting and sound were perfect (unusual for a touring show) and the band were fabulous. The audience, somewhat surprisingly, had a good few 'younger' members enjoying the evening, and this may go a long way in stating this music has not had its day yet and still has its appeal to a new, younger audience. What would have made my night absolutely perfect is if I had been sat at a table with a drink in my hand, watching this show. The Las Vegas Sands Hotel illusion would have been complete. Go grab a ticket for this show it is a powerful punch of nostalgia.

The Rat Pack - packs a powerful punch of nostalgia.