Beauty And The Beast - The Atkinson, Southport

A Tale as old as time tonight in Southport, with this year’s Pantomime from All Souls Dramatic Club. A pantomime adaptation of the Disney classic musical film, Beauty and the Beast. Cleverly written with some great modern elements. An eclectic musical selection and wonderful choreography by Katie Palfrey. Cliff Gillies wrote and directed the show as well as performing and he took it all in his stride!

I was very impressed with the technical aspects of the show. In particular the transformation of beast back to prince towards the end. Great use of projection screen. Terrific lighting plot and use of pyrotechnics and confetti cannons. If I had one criticism I would say there was a lot of smoke coming from stage left, I assume the machine was broken, but if it wasn’t maybe a little less would be just as effective and not so distracting.

The music was provided by backing track and I felt as most shows do it lacked the live music feel. 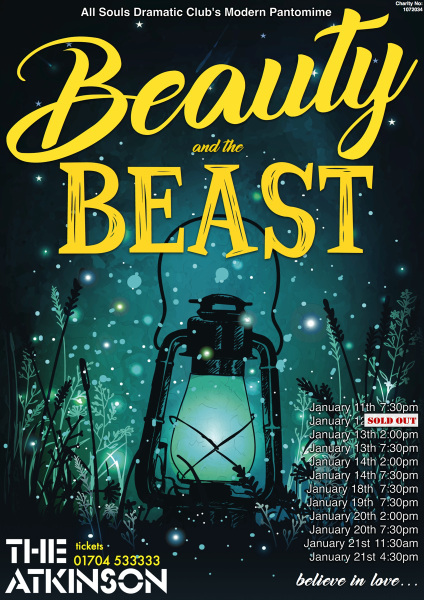 Mondiane was a lovely character role for Helen Gillies, fantastic French accent and great comic timing. The stand out performance of the night for me was Lucy Brindle, what a voice!! Incredible all round grasp of character and a professional polished performance, a young lady with a promising future.

I must say I was slightly disappointed that the song Beauty And The Beast wasn’t used. Especially as the perfect moment for it was there. The beautiful dress, the back cloth the chandelier. However, the Ed Sheeran song 'perfect' is very popular at the moment and I’m sure the youngsters in the crowd enjoyed it just as much.

This was one of many Moments that showed off the beautiful choreography and flawless dance technique from a beautiful petite Chloe Hughes. Who I believe also multitasked with vocal arrangements. We also had a cameo from her tiny toddler Olivia Hughes as Chip, who really won the affection of tonight's audience.

Be our guest was a crowd pleaser, elaborate costuming and clean choreography, using the space well. And a lot of audience participation throughout right up to the finale. I would however liked to have heard a few more “Oh no you’re not!” and “It’s behind you!” etc. But as it was the show was very long. Taking us to after 10.30pm, I’m sure things will be ironed out as it was the opening night.

We had a rather large ensemble who were all immaculate, I loved the attention to detail, in particular from the young dancers from So Talented Academy of Theatre Arts, matching hair styles, accessories and footwear.

Queen Camilla played by Jacqui Lewis has a fantastic rich velvety tone and I enjoyed her songs, in particular the opening of act two, featuring a musical number from Shrek the Musical.

The Prince, Chris Seery and the Beast, Ian Lawson, both gave a wonderful performance and some really believable moments of chemistry between both boys and Belle, Ian providing a heartfelt Les Mis esque rendition of 'She's Out of My Life'.

All in all, well worth a trip to The Atkinson, Southport, to watch a tale as old as time, Thank you to All Souls for the kind hospitality and I wish them the best of luck with the rest of the run.