Alan Ayckbourn has compared the business of combining comedy and tragedy in his writing to dancing on the edge of a razor blade. This reflects the challenge also faced in presenting one of his works. Over playing of its humorous aspects could undermine its dramatic elements. An emphasis upon its darker aspects could however result in an overtly acerbic rather than appropriately tragicomic tone. The delicate balance required is particularly prevalent in “Absurd Person Singular”, its plot allowing for the potential of descension into inappropriate broad farce. Michael Cabot’s direction avoids that in this perfectly pitched and paced production of Ayckbourn’s 1972 piece. 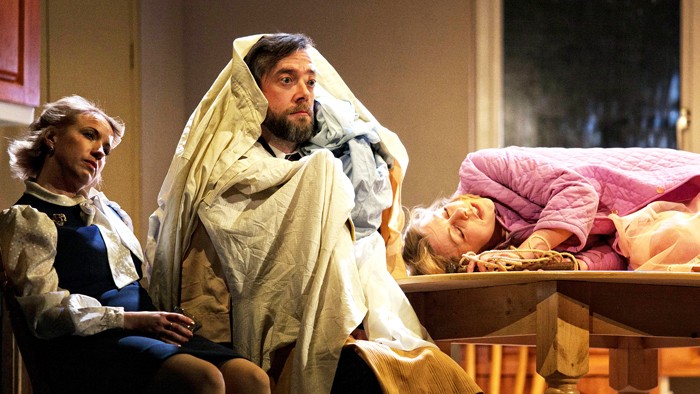 Focusing on three couples, the play tells of their fortunes over three successive Christmases in evenings spent in each of their households. Ayckbourn provides us, through them, with an acute snapshot of the aspirations, foibles and attitudes of the middle classes in the 1970s.

The play opens with a gathering hosted by Sidney Hopcraft (Paul Sandys) who dominates his housework obsessed wife Jane (Felicity Houlbrooke). As this is the seventies, she like the other women in the play is a housewife. He aims to secure investment in his small business from his invited guests who consider him their inferior. The Christmas event of the following year is at the home of the Jacksons, played by Helen Keeley and John Dorney. He is an adulterous architect. She has emotional problems which come to a head on the evening. Rosanna Miles and Graham O’Mara portray Ronald and Marion Brewster-Wright, a bank manager and his alcoholic wife. The final act of the play takes place in their home a year later where Marion’s alcoholism has resulted in her retreat to bed with a bottle. Symbolic of shifting social positions in the seventies, the ending shows us how the roles of all six has changed since the first event at the Hopcrafts.

It would be churlish to single out one performance. Although each character represents a particular type, the playing of them is never caricatured. The underlying angst and feeling of pots on the oven about to boil over is well conveyed by all. This is an ensemble piece and succeeds as such.

The sets designed by Simon Scullion and costumes by Kate Lyons are effective in recreating an era of homes and clothes which are in harmony with their owners.

Ayckbourn’s work can appear character rather than plot driven. Yet when his plays have been digested it becomes apparent that they have provided compelling stories as well as intense character studies. This is exemplified in this play in which the personality of each character and the journeys they take are laid bare. Although it says much of the seventies its themes of position and social interaction are still relevant in a country which remains class obsessed.