In Manchester, February is the month for theatrical adaptations of classic Bronte texts, firstly the uneven production of ‘Wuthering Heights’ currently playing at the Royal Exchange. This has been swiftly followed by this more traditional adaptation of the 1847 novel by the oldest sibling, Charlotte, playing at Sale Waterside this week, as part of a UK tour.

Blackeyed Theatre and Writer/Director Nick Lane are no strangers to taking the 19th century literary canon and adapting it for the theatre. Previous works receiving this treatment include Frankenstein, Moby Dick, Dr Jekyll and Sherlock Holmes, demonstrating a strong record of turning first person narratives into a three-dimensional theatre experience.

Lane addresses the hardest issue in adapting a novel for the stage in the simplest way: he allows the eponymous Jane (Kelsey Short) to narrate her own story directly to the audience. By breaking the fourth wall, he is able to retain much of the poetry in the language of the novel, with familiar phrases from the original shining through the narrative. 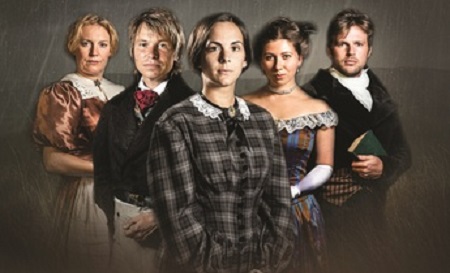 However, this approach drags the pace of the dramatic interaction, the acted scenes in between seem episodic, with explanation taking the place of action in developing characterisation.

In addition, the decision to encompass the full span of the novel means some of the supporting characters are given too much weight, nobody need to see St John Rivers this much. This has the effect of detracting from the central Rochester/Eyre romance on stage, making the second half of the play tedious and slightly superfluous.

I acknowledge it is a hugely difficult task distilling the myriad themes raised by ‘Jane Eyre’; feminism, colonialism, industrialisation and even mental health issues, into a two-hour stage production. Anyone who saw the 2017 Bristol Old Vic/NT production knows this can be done in a funny, modern and exciting manner. Blackeyed take a safer route by simply telling the story in a linear and structured way, audiences will walk away with clarity, but the sense of a lack of ambition to delve deeper nags at this production.

What lifted this piece was the use of actor/ musicians to tell the story. The cast of five playing a total of sixteen roles between them and being given every opportunity to show their versatility and range. Camilla Simpson moved easily between stern Aunt Reed and kindly Mrs Fairfax with a passable horse impression in between! Eleanor Toms convinces when spiteful, spoilt and sweet as Georgiana, Adele and Helen Burns respectively and Oliver Hamilton makes the pious and tiresome Rivers almost sympathetic upon departure.

The central relationship between Rochester (Ben Warwick) and Jane Eyre (Kelsey Short) is portrayed with affection but lacked the burning intensity that Rochester should display. Warwick is restricted in his ability to show his characters redemption through Jane, as we have no real understanding of what he developed from, making his change in character lifeless. Similarly, we never really ‘shivered in Lowood School’ with Jane long enough to enjoy the happiness she finds, subsequently loses and finally deserves.

The piano, violin, guitar, cello and vocal talents displayed by all the cast were exemplary throughout and the compositions by George Jennings sounded faithful to the era, beautifully mournful piano and violin underscoring the tender moments between Rochester and Jane. The action was placed from the outset against the backlit, burned shell of Thornfield Hall (set by Victoria Spearing), foreshadowing the tragic arc of the love story to follow.

Overall, this is an accessible and faithful telling of the classic Gothic romance, lifted by the musicality and range of the actors but restricted as a theatrical experience by the adaptation of the complex nature of the source material. https://watersidearts.org/whats-on/2726-jane-eyre/