The Turn of the Screw - Waterside Arts, Sale

Things get spooky this Halloween with Box Tale Soup’s production of The Turn of the Screw (directed by Adam Lenson) at the Waterside Arts Centre in Sale, Greater Manchester this October. Adapted from Henry James’s classic novel, set at the end of the 19th century, the play focuses on a young governess (Antonia Christophers) who accepts a position in a remote country house looking after two young children, Miles and Flora. Everything seems perfect, until she begins seeing visions of a strange man (Noel Byrne) lurking around the property and of a woman draped in black. What do these apparitions mean? What connection do they have with the two seemingly angelic children under the governess’s care? Are they real, or is she descending into madness?

This is a small-scale production which nevertheless makes excellent use of props, movement, music and puppetry to evoke a sense of place and growing sense of dread as the story unfolds. Antonia Christophers takes on the demanding role of the unnamed governess and shades her performance with just enough ambiguity that the audience is never certain whether the ghosts are real or if her increasing hysteria is the sign of a mental breakdown (or both). 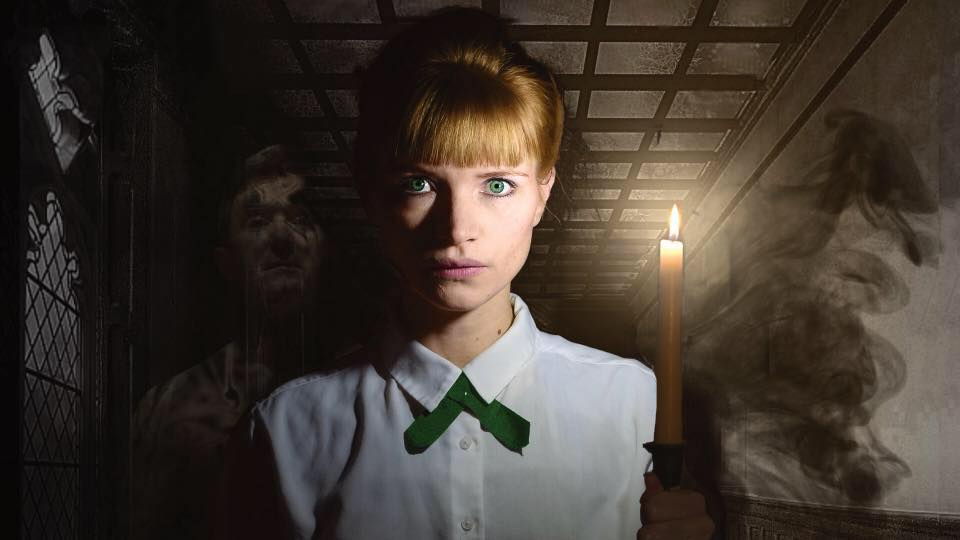 Noel Byrne is superlative in his dexterous use of puppetry, voicing both the children and the housekeeper, Mrs Grose, as well as playing both the male and female ghosts. Given that he has five characters to play, the precision shown by Byrne and the elegant dance-like interactions the pair incorporate into the production is nothing short of outstanding.

While the play is ostensibly a two-hander, the stage never feels underpopulated. And while the costume and set design are minimal, the choice of music is evocative and atmospheric, both grungy and classical, and works well in setting the tone for the sense of unseen danger and malice. Similarly, the use of puppets for both the children and Mrs Grose is an intriguing choice which introduces the idea of unreality in the mind of the governess and the sense that her character is both isolated and the only one not being manipulated in some way. While puppetry can sometimes miss the mark and prove off-putting if you don’t have the budget of, say, War Horse, in this instance it does not distract from and only enhances the dramatic story, raising intriguing narrative questions about what is real and what is imagined.

Running at 60 minutes, the play does well to not overstay its welcome, leaving just enough time to deliver a sucker punch of suspense to its audience and keep things moving towards the story’s tragic conclusion. The only criticisms are that the play ended somewhat abruptly, thus leaving the audience wondering if there was more to follow. The props and costumes also did not evoke a sense of the period as much as they might have done. Though this is perhaps down to personal preference, and others will probably find the semi-modernised look to be refreshing. Overall, this is a wonderful, artfully designed production which is especially perfect for this time of the year.