My first remarks must be about the venue. It’s been a while since I was at the Coliseum and whilst it has some new décor and different staff. One thing I still remember and that is its heart. The cheery “Hello” from the box office staff and the “Hiya” as the lady in the next seat gets past you. It’s delightful.

And so, to The Hired Man a co-production between Oldham Coliseum, Queens’s Theatre Hornchurch and The Hull Truck company. Splitting the cost three ways makes a musical affordable where it might not be possible on one ever decreasing budget. We often hear about the “Great American Musical” The “West End Smash hit”, but there is another category of musical with occupants such as “Blood Brothers”. “Love Story” and “The Hired Man”. A sort of chamber musical where the music is organic to the plot. Now don’t get me wrong, I like a big brash musical as much as the next bloke, but as proved by this work, there is merit in keeping it small and tight. 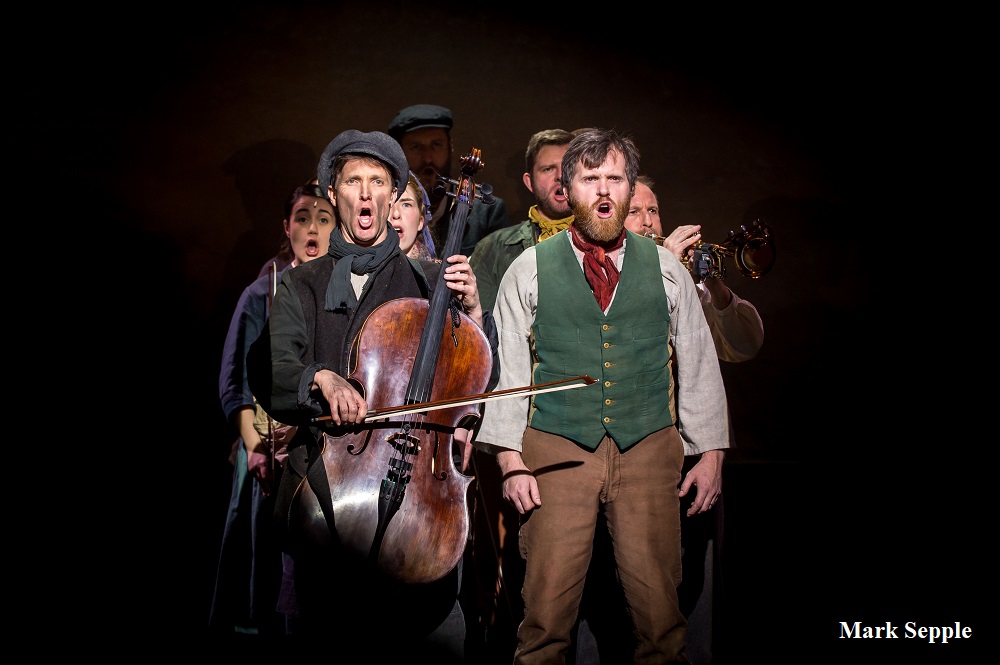 Howard Goodall has produced the quintessentially British music which marries into Melvyn Bragg’s beautifully written book which is the second part of his “Cumbrian trilogy”. The musical has apparently been much altered over the years but remains as Cumbrian as Kendal mint cake and when you have a cast as assembled here by director Douglas Rintoul it becomes a work of beauty as earthy as the fells. I’m not going to mention individuals in the cast because in an actor/musician piece such as this, the trust between them is immense and that trust has translated into assured performances all round. Rarely in my experience, is every actor a good musician and rarely is a good musician a good actor. Not so here. There is no weakness.

Having suggested this work is small and tight, the story arc certainly isn’t. Taking us as it does from a time when agriculture is on the decline to the trenches of Passchendaele and the horror found there The Hired Man employs folk song and stirring marches as well as “narrative song” (Black Rock being a highlight) to document the tale of John and Emily Tallentire. In turn tender and angry, happy and sad as was inevitable in the loss of one way of life and the onset of another. But, for all that, the rotating but simple set which is ingeniously used allows us the audience, to focus on story and song. The costume plot and the effects so perfect in their execution, are never overbearing. That’s what makes The Hired Man feel small and tight. That’s what makes it work.

This is theatre to relish and cherish. But like the world it shows us, will soon disappear, so catch it while you can.