Adapted by David Wood, this brilliant show begins with the introduction of George, his mother and father. I loved the scenery and setting which sets the scene of George’s home on a farm full of animals, cows, chickens and pigs. The design and set was fantastic and really brought the story of George to life.

With the introduction of Grandma, who is quite a mean and nasty woman the actors do a fantastic job of demonstrating just how horrid George’s grandmother is. I think this is brilliant and helped create a feeling within the audience of wanting George to teach Grandma a lesson. 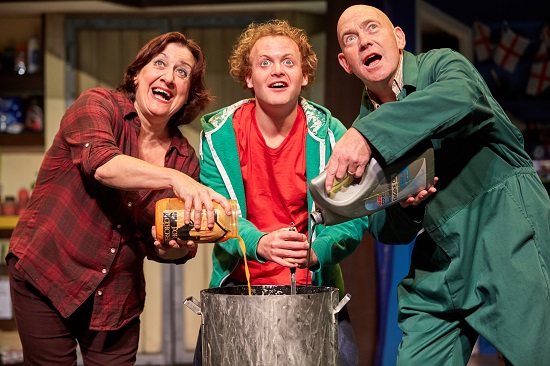 Played by Deborah Vale, Grandma is an amazing character, my favourite actor of the night. I loved how Deborah took on the role of the nasty horrid grandmother and she was extremely funny as she turned this around as George imagined her being a Kind and cool grandma.

The fun part of course was watching George create his marvellous medicine. The props were fabulous and Ed Thorpe the actor playing George created a fantastic scene mixing up all the ingredients he could find. Just like in the book, George brought to life the creation of the medicine which was fun to see and really interactive for the children.

Some of my favourite parts of the show included when grandmother suddenly grew. She literally grew and grew until she went through the roof of the house. I’m not sure how this was pulled off but it was fantastic and quite incredible.

Another part of the play I loved was the huge chicken played by Tom Eykelhof. The Chicken made the play fun both in the first and second half, running around the stage and making the audience laugh. The show would not have been the same without the chicken.

Both Mum and Dad played By Tessa Vale and Richard Mullins did a fantastic job. Their acting was fantastic, funny and hilarious. I loved when the family imagined all the things that would happen if they became famous. Another fantastic and memorable scene.

By the end of the show everyone was happy, laughing, giggling and having a great time. I think the sound effects and the skill and experience of the actors really made for a fantastic night and I’d recommend this show to friends and family. Opening Night was brilliant and certainly worth attending.