Armed with a Quicksilver backpack he’s owned since school and a pair of white briefs from Selfridges (because in his line of work… “A nice arse his everything”), Tyler Everett (Dan Ireland-Reeves) is doing well for himself as a London Rent Boy. He understands that “Saturday nights are lonely nights” and his schedule is fully booked with clients all over London.

Tyler is confident, he thinks he is good at his job and enjoys his hedonistic, drug-fuelled lifestyle. After all, what’s the point in going to work if you don’t enjoy your job?! Tyler wants to be made a headline, he wants to be work place gossip… Maybe he will be when that one trick turns to pure horror!! 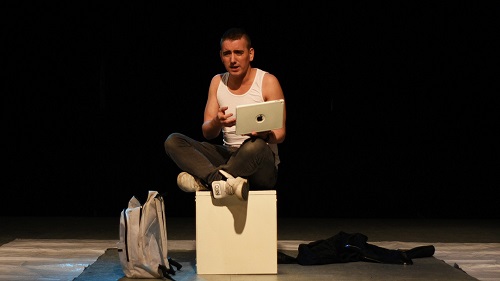 In this solo performance, Writer and Performer Ireland-Reeves presents an open, honest and visually stimulating representation of the London sex scene loaded with coarse language and hyper-sexualised and at times uncomfortable content. On paper Bleach is ground-breaking theatre, the script is refreshing; realistic and believable. Tyler tells us: “This is me. This is my story. Make of it what you will. I just want you to hear it”, but unfortunately Ireland-Reeves’ performance seemed to miss the mark and let the play down.

Ireland-Reeves is certainly a strong, physically attractive young actor who gave a valiant and brave effort to portray the Rent Boy’s story to the Vault Festival audience. However, his character ownership was somewhat unconvincing during this performance. It’s a shame that he seemed to stumble and stutter his way through the dialogue at several points, distracting from the bravado needed for the confident, city-wise Tyler. In addition, the use of the space and prop transitions appeared under-rehearsed and awkward. This is somewhat surprising as Bleach has been performed widely at venues across Europe on a square stage that accommodates no more than 2-3 steps in any direction.

It’s important to acknowledge that this is an award-winning play, so let’s give the benefit of the doubt to Ireland-Reeves for some errors during this performance and hope that the rest of the run continues to pick up pace and please audiences as Bleach is well worth seeing.

Bleach is presented as part of the Vault Festival 2019 and runs until 10th February 2019. https://vaultfestival.com/whats-on/bleach/