Lioness Theatre and Music are a company who are tired of women’s voices being ignored so have set out to create work that honours female experiences (or so they tell us in the show’s programme). Therefore, it is surprising that The Black Stuff, their first production, fails the test. Admittedly the company is helmed by director Liz Kearney and writer Holl Morrell but their decision to tell a story in which the only female character is limited to a stereotypical victim role is perplexing. 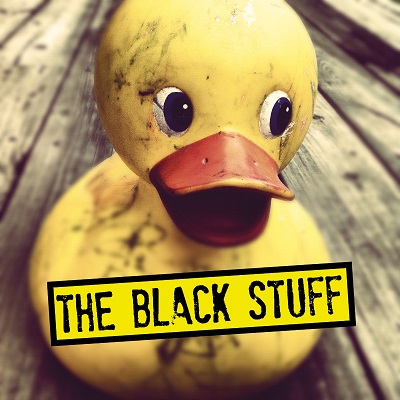 A musical play about the inventor of rubber, was perhaps always going to be a hard sell but the promised exploration of the impact of Charles Goodyear’s obsession with the black stuff on his wife is limited. When Clarissa, played by recent graduate Moureen Louie, does appear she is generally upset, being neglected by her husband or propositioned by the priest. This leads to some soulful and emotive singing from Louie but there is a sense that the strength and perseverance that ensured that Clarissa and half of her children survived the destitution Goodyear’s rubber fetish left them in, is not fully explored at all. The moment when she, rather than Goodyear, is the catalyst for the discovery of vulcanised rubber is totally overlooked. Morrell’s script isn’t always historically accurate and there is definitely potential to trim the weighty male-heavy sections of the script to engage with a more nuanced telling of the story from Clarissa’s perspective.

Danny Dixon demonstrates the strongest vocals of the evening – his biography lists Jesus Christ Superstar as a past credit and given the notes he hit with relative ease in The Black Stuff this is no surprise.   Alex Wilson and Andy Pilkington do their best with a host of stock characters but, as Wilson observes as Benji (or Ethan) ‘it’s almost like we’re in a made up world where nobody can do a convincing American accent’ – something of a bind for a show set in Philadelphia and New York. Morrell’s music is catchy, referencing a host of recognisable musicals: Les Miserablés, Hamilton, the back catalogue of Andrew Lloyd Webber and Gary Barlow – but the plodding script does it no favours.

This is a show for theatre enthusiasts with a keen interest in rubber or those wishing to know more about the black stuff as if nothing else it is highly educational about rubber.