Having seen Dancing Queen before I thought I knew what lay ahead..... I couldn't have been more wrong! The previous show featured a first half of, not ABBA as expected, but 60's and 70's hits with ABBA for the second half. I am now more than happy to report the show has had a complete makeover with new performers and presentation and is a completely different show and is entirely covering the 1970's Swedish group ABBA.

From the first flash of light, sound of the music and the appearance on stage of the group, the audience went wild! I have never seen a reaction so strong and supportive so soon, but I have to say that as the evening progressed that reaction was well deserved. Sophie-Mae Meeson and Joanne Dalladay as Anni-Frid and Agnetha are joined by Ben Wheeler and Darren Reeves as Bjorn and Benny who play guitar and keys respectively. They are supported by a first class three piece band with bass guitarist Dave Storer, on drums Steve Howard and guitarist Andy Hillier (or Sven, Sven and Sven!). 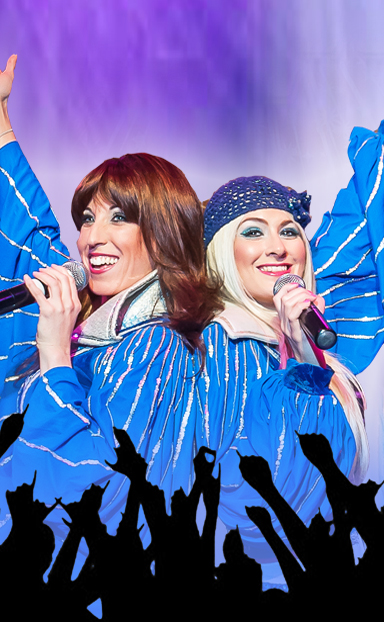 The stage set is minimal with just a backdrop and a projection of the name Abba which at the beginning shows ABBA behind the scenes getting ready to go on stage. This barely changes other than swirls of colours and the name again, (I actually prefer not too much distraction on screens so this was a plus for me) and a platform for the band at the rear, plus lighting set ups. I do feel it looked a little bare and could be enhanced with a little more 'stage settings'.

Speaking with Swedish accents there was a lot of engagement with the audience with jokes and banter and a couple of times the girls going out into the audience. On occasion the accents were forgotten especially when inviting the audience to join in. A couple of willing male 'victims' were enticed to the stage and sportingly joined in with 'Money, Money, Money'. Costumes were glamorous rather than flamboyant as many associate with ABBA, Agnetha first appearing in sparkly trousers and white top and Anni-Frid in sparkly hot pant suit and boots. There were several clothing changes for the ladies but Bjorn and Benny only changed for the second half into satin shirts and white trousers which did look more authentic. Bjorn is probably going to hate me for this but I really think a wig would help with the look!

Starting off with ' Waterloo' the Eurovision winning song of 1974 (can you believe 45 years ago!) the audience were instantly swaying along, singing along and many already up dancing. All the songs you expect to hear are in the show including a medley from the Mamma Mia films and musical. I was in tears at 'Slipping Through My Fingers' (it always does that to me, mums will know!) and it is so hard to pick out a stand out song but if I had to it would be 'Winner Takes It All' but then again that is one of my favourites. For 'Fernando' the stage was swathed in red/orange lighting which I thought was a good touch setting the scene for the lyrics 'In the firelight Fernado!

The singing and harmonies were crystal clear, even over the audience singing along and I'm sure there will be many hoarse voices this morning! This is an amazing tribute with charisma oozing from the girls. The theatre took on a party atmosphere and the standing ovation was virtually throughout the whole show! All I can say is 'Dancing Queen' you are entertainment at its best,'Thank You for the Music' and 'Gimme Gimme Gimme' more!