Prince Hamlet (Laura Harris), with companion Horatio (Abey Bradbury) in tow, has been summoned home to Denmark to attend his father’s funeral. A ghost (David Harris) appears claiming to be the spirit of Hamlet’s father, the former king, and accuses Hamlet’s uncle, Claudius (Robbie James Williamson) – who has since married Hamlet’s mother, Gertrude (Anne Crowther) and assumed the throne – of his murder and tasks Hamlet with enacting his revenge.

To test Claudius’ guilt, Hamlet pretends to be mad, much to the distress of his beloved Ophelia (Fia Harrington) and arranges for two actors (Amy-Lou Harris and Harley Peers), to re-enact his father’s murder, although Polonia (Charlotte Pedley), wily chief of state and Ophelia’s mother, is inadvertently killed and his son Laertes (John Hatziemmanuel) seeks revenge. 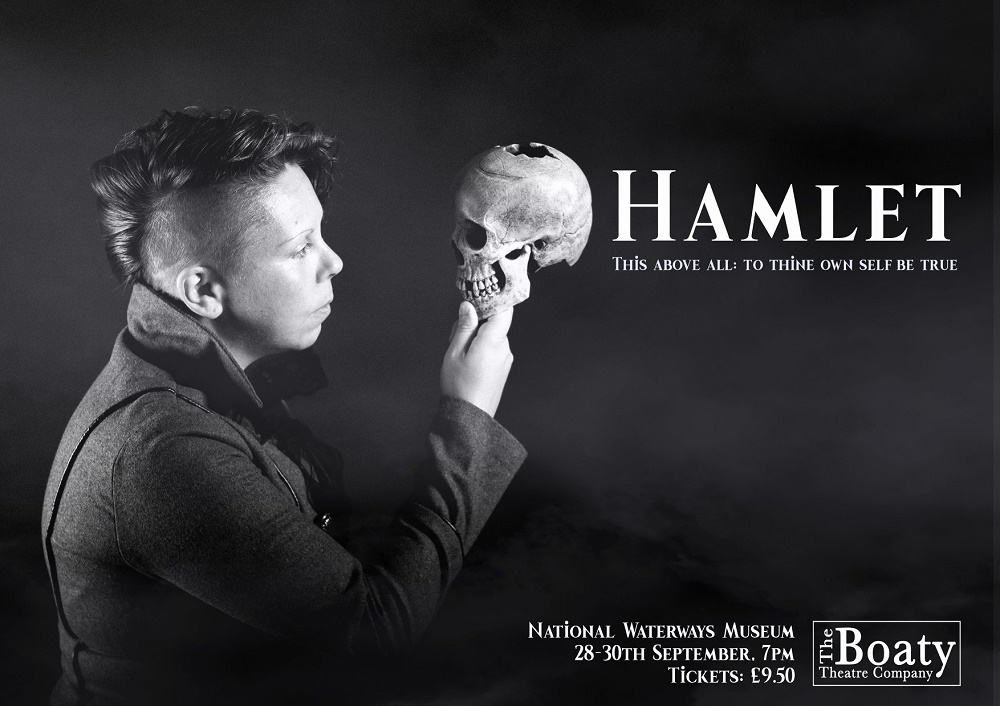 Hamlet is Shakespeare’s longest play and with over 4000 lines of dialogue it is a struggle to do the entire play in under 3½ hours: there is a universal acceptance of the ‘right cuts’ being made. This adaptation by Laura J Harris and directed by Charlotte Pedley comes in at over three hours plus an interval and it shows.

I liked the use of a thrust stage with seating on three sides and the simplicity of the staging lent itself perfectly to carry the story, but the cast were not adept enough to take advantage of this. There were numerous instances of props being brought on and pondered over, only to then be taken off, all the while accompanied by an original score from Murray that far too often served be a distraction rather than a complement: at times the music seemed to come first. If you are going to make a gender adaptation, then consistency is required throughout in terms of references to a character. Equally, if an actor has striking hair or body jewellery then intervention is necessary if they are to successfully double up.

As one of Shakespeare’s most experimental works, the play revels in every trick of the melodramatic ‘revenge tragedy’ popular at the time: a ghost; a graveyard; madness; love spurned; a duel; poison. Whilst it shows Hamlet’s mind and character through dialogue and soliloquies to highlight his private torment, he is a hero who lacks the usual heroic traits: he is good at fighting but is not a warrior; he knows about love but is no Romeo; he broods over his father’s murder but is slow to revenge. He is in fact a philosophical and political thinker and communicating that is the real challenge of the play and one that demands a cast at the top of its game: bearing in mind the number of professional productions and dramatisations that have fallen short over the years, it is perhaps an unrealistic expectation of an amateur company, which raises the obvious question: why choose this play?

It was an eclectic cast containing more glimmers than not although work is required to avoid repeated blocking; staggering the placement of cast to make a scene more dynamic; delivering lines facing the audience and ensuring what is said is clear and understood. I believe with the right production and a focus on keeping it simple this company can deliver well.

Hamlet runs for a further two performances on 29th and 30th September at 7.00pm with tickets available via www.boatytheatre.co.uk or www.chalicemediagroup.com Tickets can also be secured by phone 0151 355 5017.