Where fantasy, reality and romanticism all combine is where Breathe Out's production of That Golden Age emerges. In a new play written by Rob Johnston, we were taken on a journey of pirates, love, friendship, swashbuckling, and eventual death. It could well have been the recipe for the next Hollywood blockbuster and sequel to Pirates Of The Caribbean, except for one important point - this story's protagonists were female.

Directed by the writer himself, Rob Johnston, That Golden Age celebrates the life of two of the most famous female pirates ever... Mary Read and Anne Bonny. [it is interesting to note that although these two names have gone down in history as being amongst the most feared, fierce and infamous of all female pirates, (alliteration notwithstanding!) they were actively pirating for less than 2 years; one year of which they worked together]. 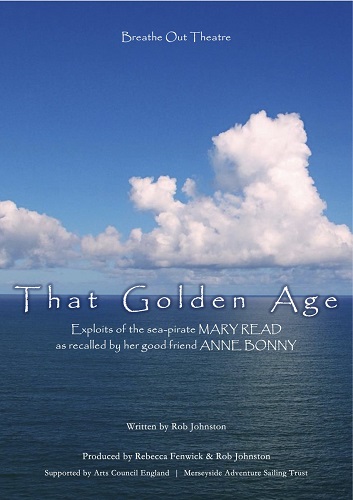 The play starts with an aged Anne Bonny receiving a visit from her doctor. It is the latter part of the 18th century and we are in Virginia, USA. In a series of memory flashbacks, Bonny recalls her adventures to the doctor, through the hallucinations of her muddled brain. Some of the recollections we know are highly romanticised, but the truth finally outs and we learn of the true fate of both.

The script is sharp, witty and light when it should be, and yet also full of tenderness too. However, I did find the settings a little confusing at times. Using the same stage set throughout (two chests, a ship's wheel, and a small table and chairs), this set became multifarious locations throughout the play, oftentimes switching so quickly from one to the next with the entrance of a new character that it was difficult to keep up. I needed a little more help, either from the set, lighting or directing to tell me exactly where the action was at any one time.

The four strong cast all played one main role, but were at times also called upon to play other incidental and minor characters to aid the narrative too. These changes were swift, slick, and with only the slightest of costume or prop changes, the characters came to life in front of us with accent and body language changes from the four excellently chosen actors. Rebecca Fenwick was superb as the southern Irish tongued Anne Bonny. He transformations from old lady to 20-something year old pirate with a glint in her eye, and back again were simple and effective and I really enjoyed her development from distaste, through curiosity, interest and eventual friendship with fellow pirate Mary Read. Mary was played here by Mary Hooten, and was full of bravado, playing up to the romaticised image we have of pirates. It is true to say that Read dressed as a man and passed herself off as male on many occasion, and yet, there was still a part of me which couldn't rid the image of pantomime. Perhaps if Hooten had been able to be a more believable man, and then the transformation - which she does twice on stage - would have been more of a surprise and shock not only to the cast but also to the audience too. Her hair length would have been as common on a man then as it is now, and so only untying her hair would have simply had no effect at all!

Adam Urey was Bonny's second husband, the pirate Calico Jack, and since historically it was his costumes and flair we remember today as being how a pirate dressed and behaved, his flamboyant yellow shirt with black breeches and thigh-length boots were a nice touch. Playing his part with both suavity and arrogance, he did rather command the stage on each entrance. His Majesty's Pirate Hunter, Jonathan Barnet, played with a definite air of Javert (Les Miserables) was Joel Parry, and his sudden transformations from the spoon-on-the-tongue English aristocrat a little out of his depth in Jamaica, to the New England accent of Bonny's physician was again superbly played.

For my money I would have liked a little more realism in the set design, and the fight sequences were really rather weak, Perhaps working with a fight director and more practice to make them look natural and sadly not rehearsed as they did look would have helped, not just with the fights but also to keep the play moving; there were moments where the energy dipped and the pace fell.