Rain Forecast in Sheffield This Week!

Manor Operatic Society have gained a reputation over the years for staging the most lavish and jaw dropping amateur productions in the country, and this week they bring possibly their most spectacular yet to City Hall, Singin’ in the Rain!

Adapted from the 1952 movie of the same name, the plot closely adheres to the original. Set in Hollywood in the waning days of the silent screen era, it focuses on romantic lead Don Lockwood, his sidekick Cosmo Brown, aspiring actress Kathy Selden, and Lockwood's leading lady Lina Lamont, whose less-than-dulcet vocal tones make her an unlikely candidate for stardom in talking pictures.

North West End were fortunate to be invited to a dress rehearsal for this ever popular show at the groups rehearsal rooms to see for ourselves just what this exciting company has in store for the Sheffield audiences. 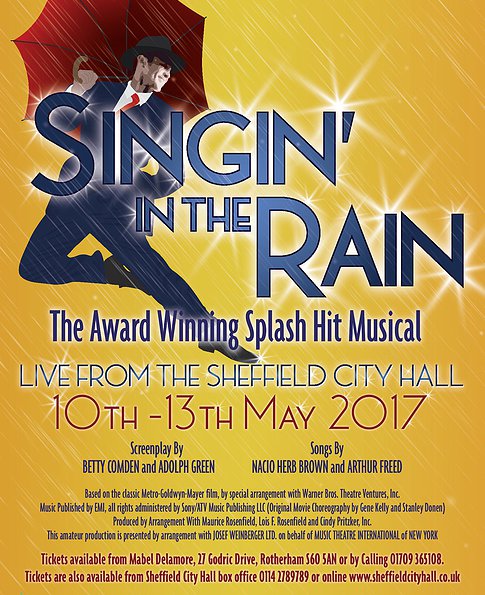 Taking the leading role of Don Lockwood is James Smith. Smith has been front and centre for Manor’s productions before taking on the role of Sam Wheat in Ghost the Musical (2015) and PT Barnum in 2016. This year Smith has had to learn to tap dance to fulfil the role, another talent he has mastered after hours of training.

Alongside Smith, Jack Skelton takes the role of Cosmo Brown. Skelton brings his incredible tap dancing talents to the City Hall stage having just won The International Theatre Dance Awards in the tap category. At rehearsals we were hypnotised by the fantastic routines (and tricks) he performs, a true highlight of the production.

You can’t have a musical without leading ladies. Lockwood’s leading lady Lina Lamont is played exquisitely by Emma Holmes. With the voice of an angel(?) her journey from the silent to the talking movies is as funny as it is tragic.

Kathy Selden is played by Issy Sykes who I have to say steals the show for me. Her portrayal of the role is just absolutely pitched to perfection and I cannot wait to see how it transfers to the huge City Hall stage.

The supporting company in this production is numbered at over 40 with each and everyone of them singing, (tap) dancing to a supremely high standard.

Finally, to the staging of the show. In recent years Manor have produced the UK’s biggest ever amateur production of Ghost the Musical and last year turned City Hall into a circus tent for Barnum. But I think this year will provide the most spectacular staging to date.  Producer and Director Richard Bradford didn’t want to give too much away when we spoke at rehearsals, but did confirm there will be rain, lots of rain with him and his team working for months to overcome the technical and logistical problems of making it rain on stage.

Singin’ in the Rain opens at Sheffield’s City Hall on the 10th May and plays until the 13th at 7:15pm with a matinee performance on the 13th (2:00pm). Tickets are selling fast but can still be found at http://www.sheffieldcityhall.co.uk/events/Singin-in-the-Rain They even have a “splash zone” at the front of the audience if you are feeling brave enough!!!!!