26 years after it first appeared on the West End stage Bob Carlton’s Return To The Forbidden Planet is as fresh today as the day it was conceived. A clever, if not sometimes predictable fusion of Shakespeare and Rock ‘n’ Roll music no matter what your age it is difficult to come away from this show without at least admitting your toes were tapping and you were actually singing along to yourself all night!

Inspired by Shakespeare's The Tempest, this juke box musical is packed with over 30 rock 'n' roll classics such as “Heard it Through the Grapevine”, “Young Girl”, “Good Vibrations”, and “Gloria”.  Presented at the magnificent Stockport Plaza by Romiley Operatic Society, I have to say they made a pretty good job of it.

On a stormy night way back in mid-winter, mad scientist Doctor Prospero (Paul Wilson) worked late in his laboratory, aided only by his wife, Gloria (Colette Desborough), as he developed the elusive formula with which he would change the world. The apparently faithful Gloria, however, duped him and sent him off into hyper-space in an old spacecraft. Unknown to Gloria, her infant daughter, Miranda (Kathryn Howe), slumbered peacefully in the craft and was now catapulted light years into the future in her father's company. Fifteen years later, a routine survey flight under the command of the chisel-jawed Captain Tempest (David Campbell) leaves earth's orbit with a new Science Officer aboard - a hard and bitter woman. As a shower of meteorites hits the ship, the Science Officer flees, and the craft is pulled inexorably towards the plant D'Illyria - the Forbidden Plant.

I consider myself a bit of an expert on this show having seen the professional version some 30+ times, and my mind was racing prior to arriving at The Plaza as to how they were going to stage the show without all the cast being able to play multiple musical instruments as in the professional version. Answer, without any problem what so ever. A glorious 10 piece band under the expert baton of Claire Sweeney more than made up for the lack of instruments on stage, although there were a few!

A video screen placed at the centre of the stage high above the bridge served not only as a warning screen for the spacecraft but also as a point of information for the audience as special guest narrator Tony Audenshaw kept us up to date with the goings on during this routine flight gone wrong. 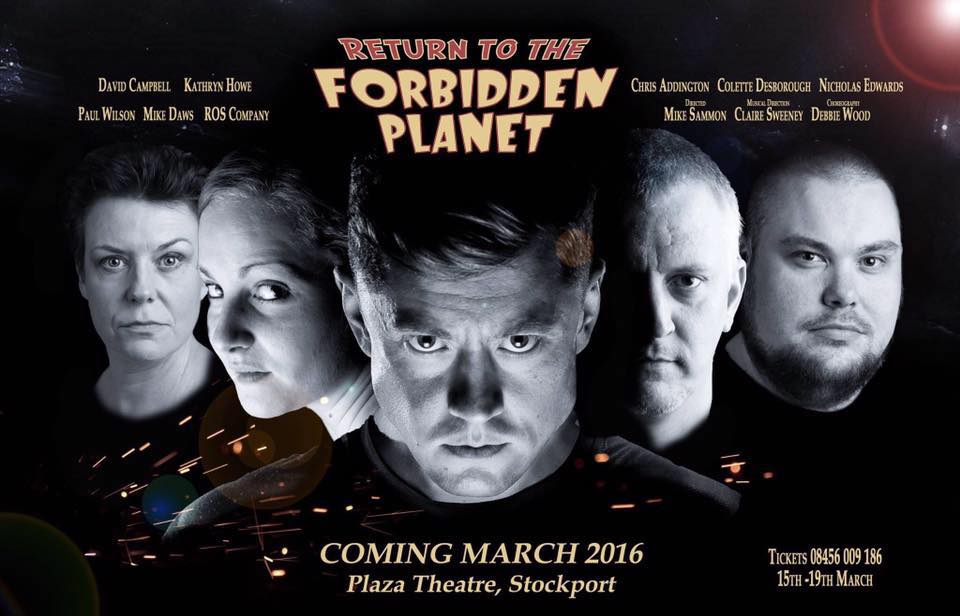 One thing this show got very right was the casting. There was not a weak link throughout the principle company and all performed to a very high standard. Perhaps one of the hardest roles in this show is Ariel played by Mike Daws. Created by Prospero and referred to as a ‘rolling coke can’ due to the fact he is on roller-skates Daws did not put a wheel wrong all night. Gliding round the stage singing and dancing in what was an effortless performance. His interactions with Miranda and Cookie were some of the highlights of the evening.

Campbell as Captain Tempest showed suitable leadership skills and despite their height difference made a nice pairing with Miranda with whom he falls in love with on their very first meeting despite his protestations. Baddie of the piece Wilson as Prospero was confident from the moment you first see him on a live video link up on the big screen. His commanding voice befitting his character. Alongside estranged wife Gloria (Desborough) they made a wonderful partnership and it was evident throughout that their love would stand the test of time and events.

But for me the star of the evening was Chris Addington as Cookie. So often the subject of everyone’s jokes and bullied throughout, he played the role absolutely perfectly, in fact I preferred him to the Cookie on the 25th anniversary tour of the professional version last year. From his facial expressions to his pin point accurate comic timing the ability to deliver powerful vocals AND play the electric guitar made him just the full package.

A word must also be made to the ensemble. In a show where on the professional stage the cast numbered 10 sometimes in amateur productions it can be a challenge to accommodate all members of these amateur societies on stage and ‘keep everyone happy’ but director Mike Sammon managed this with ease. A constant second layer of the story was played out all show with the ensemble checking dials and recording readings from the many pieces of technical equipment on the spacecraft. Where the ensemble came into their own was during the dance numbers thoughtfully set by choreographer Debbie Wood. The large stage at The Plaza helped not to overcrowd any particular area and they were a great addition to the piece, something not seen in the professional version.

A simple yet effective set thoughtfully lit by Ian Legate and Keith Dalby-Oldham along with sound by Grahame Sykes further enhanced this spectacle of a show. My only slight criticism would be that when cast arrived and left via the air lock a lot more smoke could have been used.

Return To The Forbidden Planet was a joy from start to finish and I am glad to say I survived the flight and travelled home with a broad smile on my face. Romiley Operatic Society have a great show on their hands and I strongly recommend people get down to see it. Sadly tonight’s audience was a little on the empty side. Please go and support your local societies, you won’t be disappointed and you’ll certainly enjoy yourself!