Walking into the HOME studio space to find a silent, beautiful woman struggling to play with a paddle ball, I was apprehensive about what I was about to see. Billed by one of its creators, Sleepwalk Collective’s Sammy Metcalfe, as an ‘attempt to renegotiate or just better understand our relationship with “high” or “classical” art’ – something which I personally find quite alienating – the show was a fragmented glimpse of art, performance, and theatre blasted with overwhelming light and sound.

Once the audience was settled, the performance began with a declaration of war, war between the performers and their audience.

The first act of this war is the performers’ strike, as they declare ‘we are going to bore you to death… and you will have to sit there and take it.’ There were some moments where I feared their threat would come true, as the pace slowed to a sleepy stillness for what seemed like hours – until the tempo suddenly kicked up with lights and smoke and loud music that seemed to reverberate through my entire body. 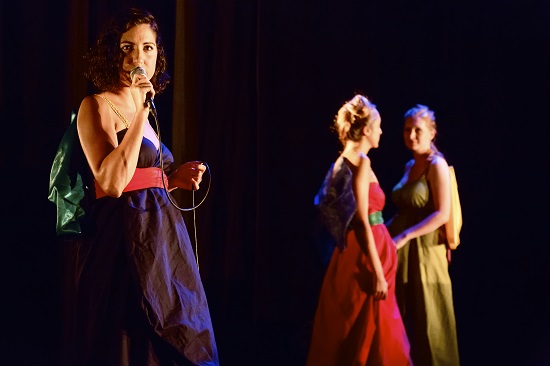 The use of ‘footnotes’, placing the plastic notes on the stage as typed projections on the back curtain explained what they represented, was genuinely inspired and a fantastic way to try and make some sense of what the performers were attempting to do onstage. However, at times it could be difficult to concentrate on the footnotes, the action, the music, and the onstage televisions all at the same time. Perhaps more importantly, during the smoke machine image towards the end the projected writing was completely obscured and impossible to read. The continuous footnotes perhaps reflected the show as a whole, using a lot of words very well to say quite little.

Perhaps fittingly, the show itself could at times feel very estranging, with the declaration of war and the distance from narrative or obvious meaning, but was at all times beautiful and striking with the images it produced. The design and lights (by Ana Ines Jabares Pita and David Alcorta with Alex Fernandes, respectively) deserve a special mention as they were incredible.

This is true experimental theatre. This is theatre by people who know theatre, who can push its limits and explore its nature while not ostensibly being concerned with being typically entertaining, rather akin to Forced Entertainment. If you are interested in a night of abstract thought and striking imagery, Domestica is a good place to start.