The Manchester Fringe Theatre scene has always been enigma. In fact, to shamelessly paraphrase Forrest Gump, it's very much like a box of chocolates because you never know what you are going to get.

In the few years that I have been involved with Fringe theatre either as an actor, director, writer, and now reviewer, I have seen some absolutely terrible productions which really should never have seen the light of day, some which were average and perfectly acceptable but not challenging or exceptional, and very very occasionally one comes along which grabs you by the throat and knocks you for six.

The Greater Manchester Fringe Festival this year has had, at least the ones I have thus far been privileged to see, more higher quality productions than I have seen on the Fringe for a long time. The standard of both writing and acting has been generally very high. 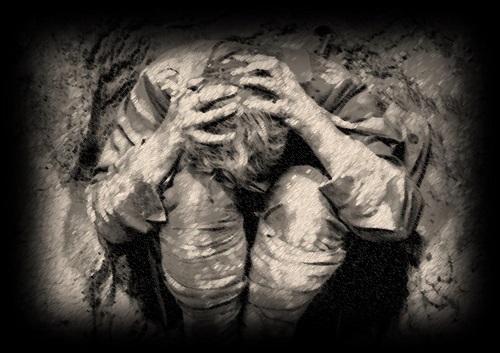 With all this in mind then, to tell you that this evening's offering, War Stories, playing at The King's Arms Theatre, has gone immediately and without hesitation to the number one position. I needed some time afterwards to come down after being taken on a very real emotional journey, and I was actually crying during the performance.

Written by the international and award-winning playwriting duo of Emma Gibson and Rob Johnston, this is a one-act tour-de-force of extremely powerful and emotive writing. It is a two-hander, and both Verity Henry as Elsie and Joel Parry as Bernard excel. They both quite simply embody their roles and it is simply impossible to imagine anyone else acting them.

In a nutshell, the play tells the story of a young Australian nurse caught up in the First World War. The action of 'the present' is in a field hospital on the Western Front in 1916, but the flashbacks take us from Australia to Cairo, to Gallipoli, to the Mediterranean Sea, to France. And we see a very true friendship evolve between her and one of the patients in this hospital; there because he is suffering from memory loss brought on by serving on the front line.

The writing is hard-hitting and very emotive, but also very gentle and slow moving. There is excellent use of mild humour in there too, perfectly placed to break the tension.

With a minimalistic but practically-perfect-for-the-size-of-stage-and-type-of-play set and lovely authentic nurse's uniform by Merriel Pym and some sensible and well considered directing by Benedict Power, this is one of the best one-act plays I have seen in a very long time.

I have only two, very slight misgivings. First, for me, someone who sometimes needs to be spoon-fed, I was once or twice not entirely sure which of the men in Elsie's life she was referring to. And second, Bernard's suit was far too modern to be of the correct period. But this is a Fringe production so maybe I can overlook that.

Otherwise, this was a production that I cannot recommend highly enough.