This production of Dracula, staged at the Salford Arts Theatre, is performed by the Barton Theatre Company, an Eccles based amateur company who stage three or four productions a year.

The set was quite minimal but effective and was predominantly red and black (good vampire colours). The costumes were fantastic and completely of the era (1890s).

The theatre itself seats approximately one hundred people and it was a shame that tonight's audience totalled a mere thirty seven. I have to say at the outset that I think this is a very ambitious play to stage.   It is quite heavy and wordy and very long (three hours including a short interval).

The role of Lucy Westerman is played by Mags Riding.   She was exuberant and excited one minute and tormented and bordering on insane the next.   Talk about from one extreme to the other; she flitted between insanity and euphoria with ease and consummate skill. As Lucy becomes more and more ill because of Dracula's nightly visits, she really does appear to be unhinged and Mags Riding should be congratulated on her execution of this very complex and difficult role.

Arthur Seward is played by Scott Harrison (who, according to the programme, took over the role and learned the part in six days) and I found his acting to be very convincing, particularly his scene at the beginning with Jonathan Harker (Brad Clarke).   He was very natural. 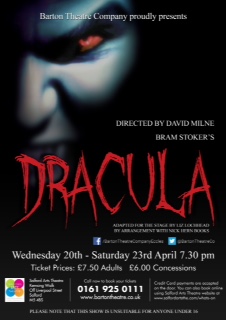 I initially felt that Brad Clarke was delivering all his lines a little flatly and he lacked some emotion but this didn't last and he did come through with plenty of emotion as the play progressed.   One particular scene with Van Helsing and Seward where he was under hypnosis was exceptionally good as he portrayed delirium one minute and heart rending distress the next.

Renfield (Eric Atkinson) is a troubled inmate of an asylum who is under the influence of Dracula.   This is a very demanding role but Eric Atkinson did himself proud.   He was quite scary and unpredictable and carried off the role of madman perfectly. He must be exhausted by the end of the evening!

Now to Count Dracula himself (Mel Hawker).   His first appearance is quite understated. He appears at the top of some stairs and there is no dramatic music or swirling fog (or bats) but he is threatening and sinister.   He bears a slight resemblance to Christopher Lee (and also Christopher Walken) and he really looks the part. I would have liked a little more from him, however, as I felt that some of his lines could have been delivered with slightly more menace and drama and with more pauses for effect.   His appearance later on during his nocturnal visits to Lucy is quite atmospheric as he is totally silent – yet very deadly.

The three vampire brides were grotesque and I really liked their writhing and hissing.   I would have preferred them all to be dressed in white, however (after all, they are the BRIDES of Dracula) and although two were, one was wearing a red two piece top which would have been more suited to a belly dancer.

One scene I thought was very well done involved Mina (Marit Schep), Jonathan and Renfield – all independently of each other.   Mina and Jonathan were suffering dual tormented nightmares whilst apart and Renfield was in the asylum, singing.   This showed great skill by all three and it was very effective. I could really feel the tension building.

A slight bugbear was the fact that between scenes, the actors moved the props themselves. This wouldn't have been a problem except for the fact that it did take some time for them to set certain things up so we were just waiting while they got everything into position.

Another observation I would make is regarding the various blackouts:   these didn't seem to be done correctly as quite often, the lights came up too soon, so we saw things that it would have been better not to see, such as scenery being moved and also Lucy getting up and walking off set after she'd had a stake through her heart – which really ruined the moment.

There were several scenes involving sexualised behaviour and Lucy's character had the majority of these. She did this very well and it must have been very challenging. Her frenzy as Dracula approaches her was very skilfully done.

Towards the end, Mina falls under the spell of the Count and I did find some of this a little uncomfortable to watch as it was quite sexual in its tone and I could see a few embarrassed grins among other members of the audience.   This is no criticism of the acting, however.

The final scene where Dracula dies is over quite quickly and I felt it was almost rushed. Bearing in mind the amount of time it takes to get to this point, I think more could be made of it.   Dracula's death almost seems incidental.

I have to say that I think this play is too long.   There are some scenes which are protracted and some which are unnecessary and I think the script really does need to be edited somewhat as it does start to lose the audience in the second half.   This is no reflection on the actors, however, all of whom perform excellently and tackle this very challenging, classical work head on.