★★★★  Stockport Operatic Society have hit the jackpot with Kiss Me Kate playing this week at the Plaza producing a superb feel good show which delivers on so many levels. In fact, to coin a phrase, ‘it’s too darn hot!’

Kiss me Kate is a musical version of William Shakespeare's The Taming of the Shrew and the conflict on and off-stage between Fred Graham, the show's director, producer, and star, and his leading lady, his ex-wife Lilli Vanessi. A secondary romance concerns Lois Lane, the actress playing Bianca, and her gambler boyfriend, Bill, who runs afoul of some gangsters.

The cast that has been put together at the Plaza for this amateur production are without exception highly talented. Each and every one of them puts 100% into their performances and with a cast of over 35 it is impossible to mention everyone by name, however there were a number of standout performances.

Lois (Hannah Davenport) and Bill (Kit Phillips) are a well matched couple and both have amazing vocals. Davenport’s facial expressions throughout the entire performance were also on point and brought an extra depth to the character.

Another exquisite partnership was that of the two gangsters sent to collect a gambling debt built up by Bill yet pushed onto Fred Graham. Richard Ross and Dan Richter both bounced off each other to create this comic partnership. Their duet ‘Brush up Your Shakespeare’ was a perfect end to their appearance in the show.

Fred Graham’s ex-wife and the ‘Shrew’ is played by Helen Attisha. Attisha has grasped this role and made it her own. Upon finding out a bouquet of flowers from her ex-husband received on opening night was in fact intended for another her anger boils over. Using the words of the play they are about to perform she seeks to exact her revenge live on stage. In what at times was an energetic performance I came away from tonight thinking there is no way I’d upset her!

A special mention has to be made to Rhona Butler, an ensemble member who really stood out due to her performances in the dance routines, all of which were executed perfectly. You just can’t help your eyes being drawn to her throughout.

The star of this show for me was Gary Jones-McCaw who played Graham. McCaw also choreographs this production for Stockport Operatic Society. The role of writer, producer, director, and actor suits McCaw perfectly as he effortlessly shines being vain, egotistical, grand, charming and witty. The scenes where he interacts with Attisha are some of the highlights of the evening.

The choreography is of a very high standard here with McCaw using the large ensemble to fill the large Plaza stage. The opening number of the second act (Too Darn Hot) was worth the entrance fee alone.

A very strong 15 piece orchestra under the baton of Claire Sweeney completes this production and brings a touch of luxury to this famous Broadway musical and one of Cole Porter’s most recognised scores.

Kiss Me Kate is a fun and witty musical that perfectly suits the Plaza stage. At 3 hours including the interval it maybe a touch long and the story at times a little confusing. But at the end of the day this is a Broadway classic and well worth seeing before its run ends on Saturday. 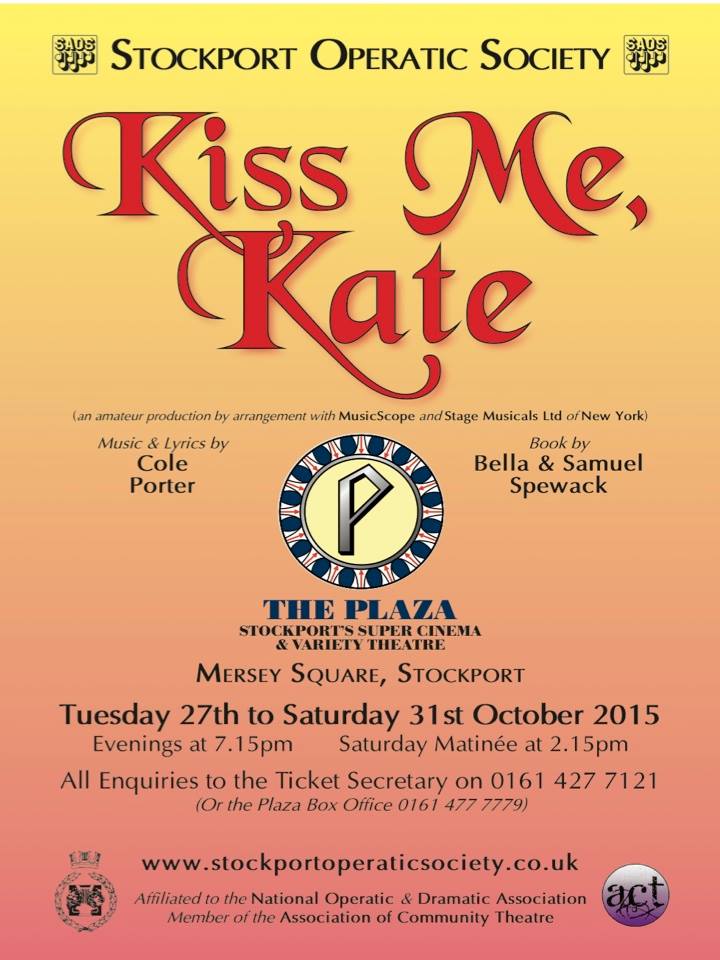